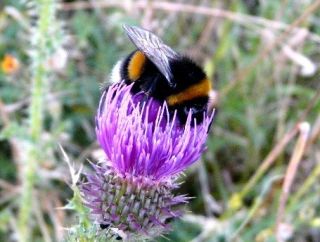 But when scientists trained bumblebees to recognize fake flowers containing food versus fake flowers with no food, the males did as well as the females.

Wait. They trained bumblebees? Yep. And it isn't the first time — past research showed bees could learn to associate two things they'd never spotted before. For the new study, researchers used different colored flowers to signal food or no food. As the bees got used to a color, the scientists would swap things around so the bees had to figure out, again, which color signaled a meal. The females, as expected, figured it out just fine. A bee expert would expect the females to be good at this; they're used to recognizing flowers by color in the wild. But the males passed the tests, too. [See Amazing Images of Bumblebees]

"Despite fundamental differences in the daily habits between male and female bees, this work illustrates that male bees can be clever shoppers in the flower supermarket even when their main interest is in mating," said Stephan Wolf, a scientist at Queen Mary University of London and lead author of the study, which is detailed today (Nov. 13) in the journal Animal Behaviour.