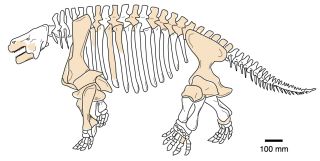 Skeleton of Shihtienfenia, a large pareiasaur from Shanxi Province, China. The skeleton outline is based on close relatives from Russia, and known bones are shaded.
(Image: © Professor Mike Benton)

Before dinosaurs roamed the planet, tanklike herbivores called pareiasaurs — barrel-chested and stubby-legged turtle relatives — reigned as Earth's first large plant-eaters. With tiny heads and bony knobs studding their skulls and bodies, pareiasaurs wouldn't have won many beauty contests. But their stumpy legs did succeed at carrying them far and wide on land, a new study found.

Pareiasaurs lived during the Permian era, about 266 million to 252 million years ago. They were built low to the ground, with wide, sprawling bodies that measured about 7 to 10 feet (2 to 3 meters) long and were covered with a bony armor plating that likely protected them from sharp-toothed predators. Compared to the dinosaurs' tenure on Earth, pareiasaurs' time was relatively brief, terminating after only 10 million years, during the Permian mass extinction.

They are best-known from specimens discovered in abundant fossil deposits in South Africa and Russia — at the Russian site, pareiasaurs represented 52 percent of the fossils from tetrapods (animals with four limbs). Other isolated finds have also emerged in Europe, South America and China. [Image Gallery: 25 Amazing Ancient Beasts]

The Chinese specimens, which were thought to represent six species, were recently analyzed in detail for the first time. Scientists determined that they were actually only three distinct pareiasaur species, and that they were "closely related" to other pareiasaur species in Russia and South Africa, according to study author Mike Benton, a professor of vertebrate paleontology at the University of Bristol.

The finding suggests that these lumbering and likely slow-moving reptiles were also capable of wandering great distances, he said in a statement.

"We see the same sequence of two or three forms worldwide," Benton said, pointing out that geologic evidence from the era suggests that there would have been no barriers preventing pareiasaurs from traveling to regions that are separated from each other today. "They could walk all over the world," he added.

The findings were published online Feb. 19 in the Zoological Journal of the Linnean Society.