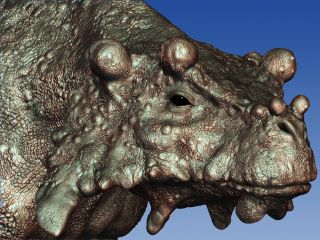 Artist's rendering of the pareiasaur Bunostegos, a cow-sized, plant-eating reptile that roamed the ancient central desert of Pangea over 250 million years ago.
(Image: © Illustration by Marc Boulay.)

More than 200 million years ago a bumpy-faced, cow-size creature, roamed the central desert of what was then the supercontinent Pangea, a new study finds.

The creature, known as Bunostegos akokanensis, is from a group called pareiasaurs, large herbivorous reptiles that lived from 266 million to 252 million years ago (during the Middle and Late Permian). Fossils of Bunostegos suggest life on Earth at that time was a lot more diverse than people thought, the researchers said.

Skull fossils found in what is now northern Niger show a series of distinctive bony knobs decorating the animal’s skull — hence the name Bunostegos, which means "knobby roof," or skull. These knobs were probably skin-covered horns such as those of giraffes, and may have been used by Bunostegos to recognize other members of its species. Other pareiasaurs had knobs like these, but they weren’t as large, the researchers said. [Images: 25 Amazing Ancient Beasts]

The fossils come from a region in the modern-day Sahara desert. About 260 million years ago, this area was a large desert in the middle of the Pangean supercontinent. Within the desert, "we suspect there was an oasis type area that could support life," said study researcher Linda Tsuji, a vertebrate paleontologist at the Burke Museum and University of Washington, Seattle. Because the climate was so isolated, "there was not much interchange into or out of that area," Burke told LiveScience.

To determine how Bunostegos fits in with other pareiasaurs, the researchers compared its anatomical traits with those of other related species. The creature was thought to be related to highly evolved pareiasaurs, but the new analysis shows it was more similar to older, more primitive pareiasaurs.

The findings suggest the animal’s bulbous cranium evolved independently of the bumpy head trait seen in other species of the time. Furthermore, the evidence indicates the Bunostegos lineage was isolated for millions of years, due to the extremely arid conditions that prevented animals from entering or leaving the desert. This isolation likely led to the beast's bizarre features, the researchers say.

Until now, most knowledge of the late Permian fauna has come from regions that are now in South Africa and Russia. But the pareiasaurs from the central desert look quite different, Burke said. "The Permian is a lot more diverse than you first think it would be," she said.

"Our understanding of the Permian and the mass extinction that ended it depends on discovery of more fossils like the beautifully bizarre Bunostegos," paleontologist Gabe Bever of the American Museum of Natural History, who was not involved with the study, said in a statement.

The discovery is detailed in the Journal of Vertebrate Paleontology.