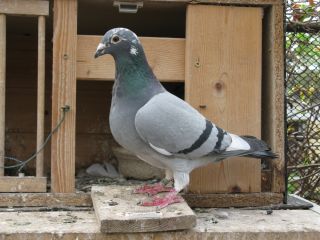 The homing pigeon is a variety of domesticated rock pigeon (Columba livia domestica) that has been selectively bred to be able to find its way home over extremely long distances.
(Image: © guentermanaus)

China currently has an air pollution problem so severe that smog is occasionally dense enough to be visible from space. But the frequently choking haze is providing an unexpected benefit to racing pigeons in one of China's most polluted regions, helping the birds to navigate home faster, researchers have found.

Using publicly available data gathered from environmental and pigeon racing agencies, scientists analyzed pigeon performance in 415 races that took place on the North China Plain, where concentrations of air pollution are higher than anywhere else in the country, the scientists reported. By comparing the pigeons' racing times to records of pollution levels on race days, the researchers hoped to learn whether air pollution might affect how well the pigeons performed during the races, the scientists said.

Racing pigeons, also known as "homing pigeons" for their ability to find their way back to a home base, are specialized birds that are bred and trained to compete in tests of navigation and speed, averaging about 37 mph (60 km/h), the researchers said. [10 Amazing Things You Didn't Know About Animals]

Homing pigeons are considered so swift and reliable in their navigation that during World War II, hundreds of thousands of British homing pigeons were used by the army, the Royal Air Force and the Civil Defense Services, according to the Royal Pigeon Racing Association (RPRA). The birds would carry messages in tiny backpacks or in containers strapped to their legs, winging their way "home," where the messages would be delivered to the recipients.

Though these high-performing homing pigeons are the same species as the feral pigeons you might see pecking at trash in city parks and streets, they're "a world away" from their guttersnipe cousins, the RPRA said on its website. With proper care, racing pigeons can live for more than 20 years, while their urban relatives generally live only 3 to 4 years, the website said.

The researchers evaluated racing data from 2013 and 2014, specifically from the fall months, the time of year when air quality in the North China Plain is typically at its worst. Since pigeons rely on scent and sight to orient themselves while flying, the scientists said in the study, it would be reasonable to expect that high levels of pollution would make pigeons fly slower and that low visibility would impede the birds' ability to plot an accurate course.

The researchers also considered other variables that could affect how well the pigeons performed: race distance, wind direction and speed, and other weather conditions.

But the results of the scientists analysis surprised them: When the air quality was worse, pigeons flew home "significantly faster," the scientists reported, though why exactly the birds would perform better under worse conditions was unclear.

The scientists suggested that perhaps visual cues weren't as important to the birds' navigation as expected, so reduced visibility wouldn't affect their flight speed. In fact, previous studies showed that pigeons could navigate home even without familiar landmarks or when they flew while fitted with frosted lenses that clouded their vision.

But that still wouldn't explain why pigeons would actually fly faster when pollution levels were high.

The scientists pointed out that scent cues are important to all birds, and may be especially important for homing behavior in pigeons. The researchers said they suspected that haze pollution, rich in organic and inorganic compounds, might prove useful to the birds by providing stronger signals that the pigeons use to map a homeward course.

Another possibility, the researchers proposed, was grounded in the pigeons' sense of self-preservation. Perhaps the birds recognized the poor air quality and were simply trying to get home faster so they could get out of the polluted air as quickly as possible, the researchers said. Thick haze would also hide potential predators from the birds' view, providing another motivation for the pigeons to hurry home.

While this study indicates that some racing birds may temporarily benefit from poor air quality, there will be no winners if China's air pollution problem continues to escalate. In recent years, experts have expressed growing concern about record-breaking smog levels, telling Live Science that "everybody is at risk" at this level of pollution, and that exposure to highly polluted air over time could lead to serious health concerns for China's residents in the future.

The findings were published online Jan. 5 in the journal Scientific Reports.