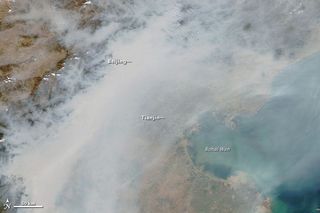 Northwest Pacific winter storms are now 10 percent stronger than they were 30 years ago, before Asian countries began their industrial boom, according to research published today (April 14) in the Proceedings of the National Academy of Sciences.

North America will be hardest hit by the intensifying storms, which move from west to east, said lead study author Yuan Wang, an atmospheric scientist at NASA's Jet Propulsion Laboratory in Pasadena, Calif.

"The increasing pollution in Asian countries is not just a local problem, it can affect other parts of the world," Wang told Live Science.

Wang and his co-authors examined how the tiny pollution particles in Asia play a role in cloud formation and the storms that spin up each winter east of Japan, in a cyclone breeding ground north of 30 degrees latitude. Monsoon winds carry aerosols from Asia to this storm nursery in the winter.

The researchers created a computer model of six kinds of aerosol pollution and tested their effects on clouds, precipitation and global weather patterns. Different aerosols affect storms in varying ways, such as by blocking the sun's radiation or providing a nucleus around which water vapor can condense to form raindrops.

The new study finds that sulfate aerosols are among the most important drivers of Pacific storms, by encouraging more moisture to condense in clouds, Wang said.

Wang said this winter's unusually cold weather east of the Rocky Mountains could have been influenced by pollution-driven cyclones and high-pressure systems in the northern Pacific. These Pacific weather patterns caused swoops in the jet stream that drove cold air south across the central and eastern United States — the so-called polar vortex. The same weather patterns are linked with record-high temperatures in Alaska this winter.

"This cold winter in the U.S. probably had something to do with stronger cyclones over the Pacific," Wang said.