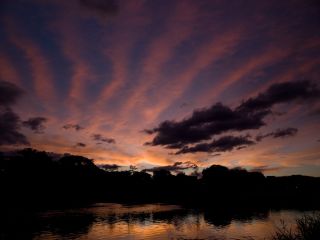 The bad news about clouds: We know even less about them than we thought we did.

The good news: We might be on our way to figuring them out.

A new cloud chamber that contains man-made air and uses a particle beam to mimic cosmic rays has revealed that cloud formation in the lower atmosphere involves at least one ingredient as yet unknown to science. However, the experiment also has uncovered some chemical fingerprints that may help researchers track down the mystery vapor. [See photos of the cloud chamber ]

The results are important because clouds and their precursors, aerosols, are the largest sources of uncertainty in climate change models. Researchers know that greenhouse gas emissions warm the Earth and that aerosols and clouds could moderate some of that effect by reflecting sunlight back into space. But these particles are so elusive and poorly understood that it's difficult to account for them in computer models of the climate. And now researchers are learning about how little they knew about cloud formation in the first place, said study researcher Jasper Kirkby, a particle physicist at the CERN particle physics laboratory in Switzerland.

"We know even less about aerosols than we thought we did," Kirkby told LiveScience. "So we had problems before and now we've got bigger problems."

Kirkby leads the CLOUD experiment at CERN, which is set up to investigate whether cosmic rays (subatomic particles from space that rain down on Earth's atmosphere) influence cloud formation.

He and his colleagues simulate the formation of fine particles known as aerosols in a giant cloud chamber made of steel. Aerosols are the seeds of clouds: When they grow large enough, water vapor condenses around them. Enough of this, and you get cloudy skies.

The researchers don't use regular air in the chamber, because it can't be purified enough to keep  out the impurities, Kirkby said. Instead they make their own air from liquid nitrogen and liquid oxygen. The water vapor used in the chamber is cleaned in a state-of-the-art purifier, he added, but even that's not clean enough. The researchers will soon start synthesizing their own water via chemical reactions as well.

The temperature inside the chamber can be controlled to the hundredth of a degree, allowing Kirkby and his colleagues to simulate any area of the atmosphere. They use a beam of particles from CERN's Proton Synchrotron accelerator to simulate cosmic rays. Fiber-optic UV light stands in for the sun.

"It's rather like cooking," Kirkby said. "We fill the pot — the chamber — with ingredients that we want, we set the temperature that we want, and then we watch."

With this set-up, Kirkby and his research team simulated aerosol nucleation, or the clustering of molecules in the atmosphere to form aerosols. They soon found that their two likely candidates for kicking off nucleation, sulfuric acid and ammonia, can't account for the amount of nucleation seen in the lower atmosphere, which lies within about 0.6 miles (1 kilometer) of the Earth's surface.

The amount of nucleation seen in the chamber is "between a tenth and a thousandth of what's seen in the lower atmosphere," Kirkby said. "It's clear that there's something missing."

However, sensitive measurements suggest that trace amounts of organic vapors that leaked in from the surrounding air were contributing to the nucleation. That gives researchers a starting point for hunting down the mystery element.

The researchers also found that their mock cosmic rays stimulated nucleation by a factor of 10, suggesting cosmic rays also boost cloud formation. That doesn't prove that cosmic rays affect climate, Kirkby said, but it does leave open the possibility.

"This means that one does have to think about the effect of the sun on these little particles," said Owen Toon, an atmospheric scientist at the University of Colorado, Boulder, who was not involved in the research. Toon called the experiment "really impressive."

The research doesn't call into question the basic science of greenhouse gas warming, Kirkby emphasized, but rather refines one facet of the research. Climate models currently predict an average global temperature increase of 3 to 7 degrees Fahrenheit (2 to 4 degrees Celsius) by 2100.

The data generated by the CLOUD experiment (CLOUD stands for "Cosmics Leaving Outdoor Droplets") will feed into global models of aerosol formation, Kirkby said, which in turn will carry into global climate models.

"It's part of the jigsaw puzzle, and you could say it adds to the understanding of the big picture," he said. "But it in no way disproves the other pieces."