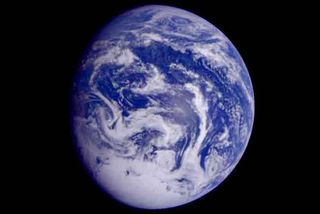 Skeptics who argue that global warming is caused by cosmic rays rather than man-made greenhouse gases have been dealt another blow. Some who question the human-induced global warming scenario argue that changes in the intensity of these rays, which are caused by variations in solar activity, affect the cloud cover of the Earth, allowing heat from the sun to build up, and accounting for the rise of global temperatures in recent years. But a new study detailed in the Institute of Physics’ journal, Environmental Research Letters, finds no link between the incoming cosmic rays and global cloud cover. The research was led by Terry Sloan of Lancaster University in the UK and Arnold Wolfendale of Durham University, also in the UK. The sun’s rays are of course the key drivers of Earth’s climate as they are the main source of our planet’s energy. However, some skeptics have argued that changes in solar activity are responsible for the current period of warming. They argue that the sun's magnetic fields cause fluctuations in the intensity of cosmic rays, which they contend can ionize gases in Earth’s atmosphere, creating small particles that collect water to form low-level clouds. These clouds, in turn, scatter incoming light, causing a cooling effect. Among the skeptics, a small group of scientists say it is a decrease in cosmic rays that has decreased the amount of low-level clouds, causing the current phase of warming. A recent British television special, "The Great Global Warming Swindle," which aimed to debunk current scientific understanding of the causes of global warming, named this as the main cause of Earth’s rising temperatures. But the new study found no significant link between the intensity of cosmic rays hitting the Earth and low-level cloudiness. Its findings "suggest that it is fairly unlikely that [cosmic rays] have any discernable effect on the cloudiness," said Rasmus Benestad of the Norwegian Meteorological Institute, who was not involved with the study. "If the effect were important, then we would have seen it," Benestad told LiveScience. "[Cosmic rays] cannot account for the present warming trend."

Benestad also pointed out that no long-term trend in cosmic ray intensity that corresponds with the decades-long rise in global temperatures has been detected, which is a bigger stumbling block for those who support cosmic rays as the source of global warming.