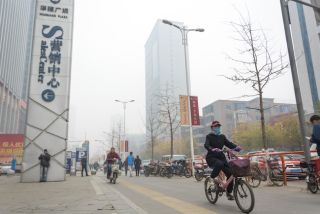 Thick smog over Shenyang, a large city in northeastern China, sent air pollution in the city last weekend to levels about 50 times higher than what's considered safe by the World Health Organization (WHO). That level of pollution puts the health of everyone in the city at risk, experts say.

China's industrial cities — as well as industrial cities in many other parts of the world — have long been plagued by high levels of fine particulate matter, which researchers call "PM2.5 pollution." (The particles that make up this pollution are 2.5 microns or less in width.) This pollution is created by vehicle exhaust, coal-fired power plants, burning wood and a number of other sources, and produces a hazy blanket of air.

Over the course of a 24-hour day, the maximum amount of fine particulate pollution that a person should be exposed to is 25 micrograms per cubic meter of air, according to the WHO. Chinese government agencies and the U.S. Environmental Protection Agency (EPA) both put that number a bit higher, saying that people should not be exposed to more than 35 micrograms per cubic meter of air.

But in Shenyang over the weekend, levels reached more than 1,400 micrograms of particulate matter per cubic meter, according to the BBC.

That much pollution is "a big deal," said Dr. Norman Edelman, a senior consultant for scientific affairs with the American Lung Association.

Fine particulate matter is dangerous for human health because the particles are so tiny that they can bypass the body's normal defense systems, such as the mucus membranes that line the mouth and nose. The particles can penetrate deep into the lungs, and sometimes can even pass through the tissue of the lungs and enter the bloodstream, Edelman said. [10 of the Most Polluted Places on Earth]

Particulate pollution is hard to escape because its sources are so prevalent in modern cities and towns. But breathing in these superfine particles damages the respiratory tract, experts say, and it can worsen people's pre-existing conditions and increase the risk of new infections.

"If you look at an area that is subjected to spikes in pollution, you'll see an increase in hospital admissions for lung disease and heart disease," Edelman told Live Science.

People with respiratory conditions such as asthma are particularly susceptible to the adverse effects of air pollution, he said.

But research also suggests that air pollution and heart disease are linked, although this link is less clear than the one between pollution and respiratory problems, Edelman said. One idea is that pollution increases inflammation in the body, which can set off the processes that increase a person's risk of having a heart attack or stroke, he said.

Air pollution isn't a problem only for people who already have heart disease or respiratory conditions. Everyone breathing in Shenyang's highly polluted air could potentially feel the effects of that much pollution, Edelman said. Skin rashes, headaches, coughing, nausea and dizziness are a few of the health effects caused by air pollution, according to the EPA. Over time, the pollution can even lead to cancer, birth defects and nervous system damage, according to the agency.

The surgical masks that some people wear to cover their mouths and noses don't fully protect people from such high levels of pollution, said both Edelman and Janice Nolen, assistant vice president of national policy at the American Lung Association.

"At this level [of air pollution], everybody is at risk — healthy adults, everybody," Nolen told Live Science. Normally, the people most at risk are children, people over 65, people with health problems and those who work or exercise outdoors.

To mitigate the health risks that particulate pollution can cause, people need to clean up the sources of the pollution, Nolen said. That's what the U.S. did in 1970 when it passed key amendments to the Clean Air Act, which regulated air pollution on both the federal and state levels. The bill helped to set up controls for the nation's biggest air polluters, such as coal-fired power plants and diesel engines, and it saved the lives of an estimated 150,000 people every year, according to the EPA.

Cleaning up air pollution takes time, Nolen said, but technologies are available to help reduce the pollution caused by smoke stacks and vehicle engines, for example.

"There are a whole host of steps that we have found can reduce emissions of fine particle pollution and clean up the air," she said.