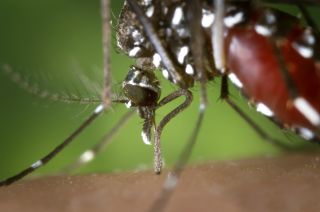 The proboscis of an Asian tiger mosquito (Aedes albopictus), a virus vector common in North America, as it feeds on human blood.
(Image: © CDC/James Gathany)

Zika virus is the most recent in a list of viruses that were formerly confined to remote niches of the world but are now expanding their reach into the Northern Hemisphere.

Much about these viruses is still poorly understood, wrote Dr. Anthony Fauci, director of the U.S. National Institute of Allergy and Infectious Diseases (NIAID), and Dr. David Morens, senior scientific advisor for the NIAID, in an article published in the New England Journal of Medicine on Thursday (Jan. 14).

Zika virus is carried by mosquitos and causes generally mild symptoms like fever and rashes. However, it has recently been linked to an alarming rise in newborns with microcephaly — a condition causing reduced brain development and abnormally small heads — in Brazil. Ten times as many cases were reported there in 2015 than in previous years, according to the Centers for Disease Control and Prevention (CDC).

In their new article, Fauci and Morens evaluated the extent of the threat posed by this fast-spreading virus.

Health officials have been aware of Zika virus for 60 years, but it is only within the past year that data gathered from infected populations hinted at the more severe consequence of infection, the researchers said. [Tiny & Nasty: Images of Things That Make Us Sick]

In French Polynesia, an epidemic of diverse neurologic conditions happened concurrently with Zika virus outbreaks, suggesting an association between the two. And some public health officials have attributed the recent and alarming spike in infants with microcephaly in Brazil to Zika infections contracted by women while they were pregnant.

However, Fauci and Morens warn, it's too soon to conclude that Zika virus is definitely responsible for these conditions. Commercial tests for Zika are yet to be developed, and it is possible that a closely related disease, like dengue virus, actually caused some suspected Zika infections, the researchers said.

"Intensive investigative research" is required to look at the possible link between the virus and the birth defects, Fauci and Morens said. But even if no link is discovered, researchers must learn more about Zika, they said.

On Dec. 31, the CDC reported the first locally acquired Zika virus case in Puerto Rico, farther north in the Americas than ever seen before. And on Monday (Jan. 11), a traveler who had recently returned to the United States from Latin America was diagnosed with Zika in Houston, according to the Texas' Harris County Public Health and Environmental Services (HCPHES).

Harris County officials stated that the infected person had symptoms "that are often associated with the Zika virus, which include fever, rash and joint pain."

This case isn't a cause for alarm — Zika can't spread directly between people, and as of Jan. 14 there have been no reports of anyone acquiring the illness while in the United States, according to the CDC.

However, one species of the mosquito group known to carry Zika, the Aedes genus, is common across North America. This bug, called the Asian tiger mosquito, carries viruses related to Zika, such as chikungunya and dengue, and is especially common in U.S. states that border the Gulf of Mexico, as shown by a species distribution map created by the CDC.

As yet, there is no vaccine against Zika and no cure for the infection. But Fauci and Morens wrote that they are skeptical about the benefit of pursuing a vaccine to halt Zika's spread, suggesting that vaccines are an inefficient solution to epidemics that appear seemingly out of nowhere. Vaccinating entire populations could be prohibitively expensive, the authors added.

The more promising course, they wrote, would include implementing public health strategies that respond more quickly to contain infections before they reach epidemic proportions, and developing broad-spectrum antivirals, rather than following the more traditional treatment approach of "one bug, one drug."

Perhaps the most unusual thing about Zika is that "it's not so unusual anymore," said Dr. Bruce Hirsch, an infectious disease specialist with Northwell Health in New York, who was not involved in writing the new editorial. "These exotic infections like Zika, dengue, West Nile and chikungunya are becoming very well-known and familiar," he told Live Science.

Hirsch explained that global warming is likely allowing the mosquitos that carry Zika to range farther north. And as human populations grow and live closer to each other, the risk of disease transmission and the possibility of emerging epidemics increases, Hirsch said.

Perhaps the key to beating these viruses lies in better-coordinated global efforts, Hirsch added. If infections in remote locations can reach the United States' doorstep in a matter of months or weeks, then the global health care community must pay closer attention and respond more immediately to health crises as they develop, no matter where in the world they are, he said.

"We need to understand that monitoring the health of people around the planet is a way to keep our local community safe," Hirsch said.