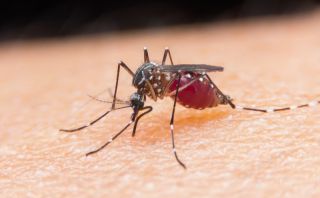 Four more people were diagnosed with dengue fever on Hawaii's Big Island today (Nov. 5), raising the number of locally transmitted cases to 19 people, according to the Hawaii State Department of Health.

Health officials say these "locally transmitted" cases are concerning because, although dengue has popped up sporadically in Hawaii before, in most previous cases, the disease was imported, meaning travelers brought it to the islands from elsewhere. In the new cases, people are contracting dengue from the bites of local mosquitoes.

"Although dengue is not endemic to Hawaii, we do have the mosquito species capable of transmitting the disease," Dr. Sarah Park, the state epidemiologist for Hawaii, said in a statement last week. It's likely an infected traveler was bit by a mosquito and infected the local mosquito population, which led to this cluster of cases, Park said. "We want the public to be aware of this mosquito-borne disease and the steps they can take to prevent infection," she added.

The outbreak likely started in mid-September, and has infected people on all sides of the Big Island, meaning there are multiple hotspots, Park said. It's unclear who brought the illness to Hawaii, but a pending genetic analysis of the virus will tell researchers where in the world the virus originated, Park said. [Tiny & Nasty: Images of Things That Make Us Sick]

Dengue (pronounced DEN-gee) symptoms usually begin a week after a person is bitten by a mosquito carrying the virus, and can include fever, joint or muscle pains, headache or pain behind the eyes, and rash, according to the Hawaii State Department of Health.

To prevent the virus' spread, health officials advised people to use mosquito nets and wear insect repellant and long-sleeved, light-colored clothing (mosquitoes are drawn to dark colors). People can also get rid of standing water where mosquitoes lay eggs, and avoid going outside in the early morning and dusk, when Aedes mosquitoes are most active.

There is no vaccine or specific treatment for dengue fever, but people with the virus can receive supportive care, including taking acetaminophen, drinking fluids and resting. Infected people should avoid taking aspirin and ibuprofen because these painkillers can worsen the bleeding problems that can sometimes happen in people with dengue, the department said.

This is Hawaii's third outbreak of locally transmitted dengue in the past 14 years. The largest of these struck in 2001, when 122 people contracted dengue, mostly on the island of Maui, according to the Centers for Disease Control and Prevention. In 2011, a small outbreak sickened five people on Oahu, the state's most populated island.

Will dengue become endemic in Hawaii?

Dengue fever is endemic, or permanently established in the human population, in a number of tropical places around the world, including Puerto Rico and popular tourism spots in Latin America and Southeast Asia, according to the CDC.

However, the virus is unlikely to become endemic in Hawaii, said Jonathan Day, a professor of medical entomology at the University of Florida.

Dengue is different from other mosquito-transmitted viruses that have become endemic in recent years in parts of the U.S., he said. For instance, West Nile virus is carried by birds, and mosquitoes can spread the disease from birds to people because they bite both. But dengue doesn't have such an animal "reservoir," except for monkeys in Africa and Southeast Asia, the CDC said. Therefore, the virus is unlikely to persist in the mosquito population for long, once the human outbreak ends.

Other dengue outbreaks in the United States have typically lasted a year or two. In an outbreak in Brownsville, Texas, 25 people became ill with dengue in 2005, and in Key West, Florida, 90 people got dengue from 2009 to 2011, according to the CDC. [7 Devastating Infectious Diseases]

These outbreaks usually end with the help of public education campaigns and mosquito control measures. People in these areas also typically have air conditioning in their homes, which removes the humidity mosquitoes need in order to live, Day said.

But in places like Puerto Rico, dengue is likely there to stay, he said.

"There's a constant dengue problem in Puerto Rico," Day said. "You go to downtown San Juan in Puerto Rico, and the houses are all open — they have bars on the windows, but no screens, the front doors are open [and there's] no air conditioning. Every house has a population of Aedes aegypti [mosquito] that live right inside the house."

For Hawaii, however, dry weather is in the near-term forecast, which should help abate mosquito transmission of the virus, Park said. Nonetheless, it's unclear how long the outbreak will last.

"I think the only question about Hawaii right now is, are we looking at the beginning of a large transmission event, where there might be 50 or 100 cases, or are we looking at something that has been going on during September and October, and is essentially over?" Day said. "At this point, I don't think we know the answer to that."