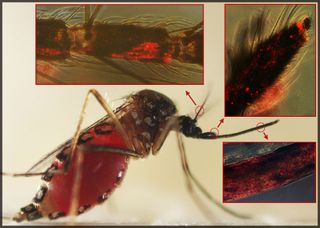 This picture shows the presence of the dengue virus in the mosquitoes' chemosensory (antennae and palp) and feeding organs (proboscis).
(Image: © Johns Hopkins Bloomberg School of Public Health)

Mosquitoes are already blood-sucking machines, but new research indicates that the dengue virus, which the mosquitoes transmit to humans, makes them even thirstier for blood.

The virus specifically turns on mosquito genes that make them hungrier for a blood meal; the activated genes also enhance mosquitoes' sense of smell, something that likely improves their feeding skills. The result is a mosquito better able to serve the virus by carrying it more efficiently to human hosts.

"The virus may, therefore, facilitate the mosquito's host-seeking ability, and could — at least theoretically — increase transmission efficiency, although we don't fully understand the relationships between feeding efficiency and virus transmission," study researcher George Dimopoulus, of the Johns Hopkins Bloomberg School of Public Health, said in a statement. "In other words, a hungrier mosquito with a better ability to sense food is more likely to spread dengue virus."

The virus doesn't hurt the mosquitoes that carry it, a specific species called Aedes aegypti, but it lives in them. When the mosquito bites a human, it spreads the deadly disease through its saliva. More than 2.5 billion people live in areas where dengue fever-infected mosquitoes live. The World Health Organization estimates that between 50 million and 100 million dengue infections occur each year.

The researchers analyzed the mosquito genes before and after being infected with the virus, finding changes in 147 genes. These post-infection genes make proteins that are involved in processes that include virus transmission, immunity, blood feeding and host seeking, they found.

"Our study shows that the dengue virus infects mosquito organs, the salivary glands and antennae that are essential for finding and feeding on a human host," Dimopoulus said. "This infection induces odorant-binding protein genes, which enable the mosquito to sense odors."

"We have, for the first time, shown that a human pathogen can modulate feeding-related genes and behavior of its vector mosquito, and the impact of this on transmission of disease could be significant," Dimopoulos said.

This is just one of many recent examples of a parasite taking control of an animal for its own benefit. Other examples include a fungus that turns ants into zombies and a virus that causes caterpillars to dissolve and then rain virus particles down on other potential hosts.

The study was published today (March 29) in the journal PLoS Pathogens.