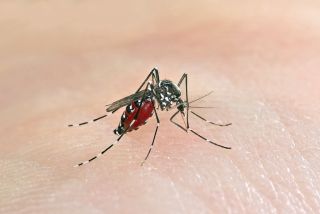 There's a new pest invading many American towns, and it's about as menacing as it sounds: the Asian tiger mosquito.

Named for the black-and-white stripes on its body, the Asian tiger mosquito (Aedes albopictus) was first brought to Texas in a shipment of tires (which are notorious for holding the standing water that mosquitoes require for breeding), the Wall Street Journal reports.

The bug is worrisome for several reasons: Unlike other mosquitoes, the aggressive Asian tiger bites all day long, from morning until night. It has a real bloodlust for humans, but also attacks dogs, cats, birds and other animals. [Sting, Bite, Destroy: Nature's 10 Biggest Pests]

"Part of the reason it is called 'tiger' is also because it is very aggressive," Dina Fonseca, associate professor of entomology at Rutgers University, told the Journal. "You can try and swat it all you want, but once it's on you, it doesn't let go."

The Asian tiger mosquito joins other insects now threatening U.S. residents. Gallinippers (Psorophora ciliata), for example, are a type of shaggy-haired mosquito whose bite reportedly feels like being stabbed; they're currently found throughout much of Florida.

But few insects are as effective at spreading illness as the Asian tiger mosquito. The pest transmits more than 20 diseases, according to the Cornell Chronicle, including West Nile fever, dengue fever, yellow fever and two types of encephalitis.

There's no vaccine to prevent chikungunya and no treatment; people usually recover in a few weeks. But while they're infected with the virus, they can be bitten again by another mosquito, which could then spread the disease to someone else, according to the Centers for Disease Control and Prevention (CDC).

Since its introduction to the United States in the 1980s, the Asian tiger mosquito has spread to 26 states, primarily in the eastern United States, the CDC reports. The bug is also established in South and Central America, southern Europe and several Pacific islands.

Part of its success at spreading throughout the world is due to a warming climate, but the Asian tiger mosquito has one other pesky adaptation: Its eggs are tough enough to survive a cold winter, according to Science News.

But this also means Asian tiger mosquitoes are expanding their territory. Experts recommend removing all sources of standing water, wearing insect repellent and covering up with long sleeves and pants to avoid the bloodthirsty mosquitoes — and the diseases they spread.