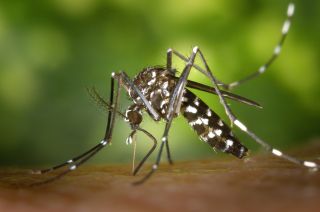 Infections with Zika virus, which is carried by mosquitos, are on the rise across the Americas, raising concerns among health officials. Although the virus is generally not life-threatening, evidence suggests that it may be responsible for recent increases in birth defects in Brazil and French Polynesia, where infections are more common.

On Thursday (Dec. 10), officials in Panama announced the country's first case of locally acquired Zika virus — meaning that a person caught the disease from a mosquito in that country, rather than while traveling elsewhere — raising the number of countries in the Americas with reported cases of Zika infections to 10.

Previously, on Dec. 1, the Pan American Health Organization (PAHO) had issued an alert about the virus. At that time, cases were reported in Brazil, Chile (on Easter Island), Colombia, El Salvador, Guatemala, Mexico, Paraguay, Suriname and Venezuela.

The Zika virus is a relative of the viruses that cause dengue fever, yellow fever and West Nile infections. Symptoms of Zika, as the infection is called, include fever, rash and joint pain, according to the Centers for Disease Control and Prevention (CDC). The symptoms typically appear about three to seven days after a bite from an infected mosquito, and last up to a week. Currently, there is no vaccine for Zika, although those infected by the virus can be treated to relieve its symptoms.

Infections are transmitted to people through bites from infected Aedes mosquitos, a genus of mosquitos that includes several species that also carry other viruses that are closely related to Zika. The mosquito species Aedes aegypti and Aedes albopictus are two of the main carriers of Zika, and live on every continent except Antarctica. [Tiny & Nasty: Images of Things That Make Us Sick]

Initially detected in humans in 1954 in Nigeria, Zika virus was largely confined to Africa and Asia until the first cases emerged in the South Pacific in 2007, according to a 2009 study published in the journal Emerging Infectious Diseases.

A major outbreak developed in French Polynesia in 2013, with 19,000 suspected cases reported in a year, the first epidemic other than dengue fever to manifest in the area. After that, Zika spread rapidly across the Americas.

In October of this year, health officials in Brazil noted an alarming rise in cases of a congenital condition called microcephaly — which involves underdevelopment of the brain and head — particularly in the regions of Brazil most affected by the virus, according to the PAHO.

Traces of the virus were found in affected newborns' amniotic fluid, confirming health officials' fears that Zika virus was linked to the birth defect. Researchers tallied a 20-fold increase in newborns with microcephaly in 2015 compared to 2010. There has been an especially large spike in cases since October, with a total number of 1,248 microcephaly cases — including seven deaths — reported in 14 of Brazil's 26 states.

Authorities in French Polynesia have also reported a recent uptick in brain defects and lesions in fetuses and newborns that correspond to Zika virus outbreaks. Although none of the mothers demonstrated symptoms of Zika virus, test results showed that four of them might have been carrying it, according to the PAHO.

Health officials are warning pregnant women in areas affected by Zika to take extra precautions against possible infection, particularly during the first trimester.

Likewise, the CDC urges travelers — especially pregnant women — visiting countries in South America, Mexico and Central America to safeguard themselves against mosquito bites by covering exposed skin, keeping doors and windows closed or screened, and using mosquito nets and repellents, especially during the daytime, when the mosquitos are most active.