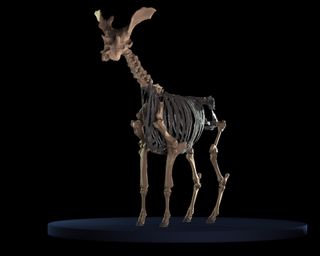 Giraffes are tall creatures, but they're not as large as their extinct relatives, Sivatherium giganteum, a new study finds.

In fact, S. giganteum may be the largest ruminant on record, researchers said. Ruminants are hoofed, cud-chewing creatures with four stomachs — a group that includes cows, buffalo and camels.

"This is certainly the largest giraffid [a member of the giraffe family] that ever existed," said study lead author Christopher Basu, a doctoral student in the Structure and Motion Laboratory at the Royal Veterinary College in London. [In Photos: See Cute Pics of Baby Giraffes]

S. giganteum lived more than 1 million years ago in Africa and Asia. But it didn't look much like a modern giraffe (Giraffa camelopardalis). Instead, the beast had a short neck and short, stocky legs, the researchers said.

When paleontologists first uncovered S. giganteum in the mid-1800s, they weren't quite sure what to make of it. It seemed that the ruminant was an elephant-size, mooselike creature that was the missing link between modern ruminants and elephants, rhinoceroses and horses, historical documents suggest.

But now, S. giganteum is placed firmly within the giraffid family. However, with its clunky body, the giant is probably more closely related to the short-necked okapi — the only living relative of the giraffe — than it is to the long-necked giraffe, said Nikos Solounias, a professor of anatomy at the New York Institute of Technology (NYIT) College of Osteopathic Medicine, who was not involved in the study.

Even though researchers have known about S. giganteum fossils for about 180 years, little is known about the creature. So, Basu, who studies giraffe locomotion, decided to estimate the ancient animal's weight, or body mass.

Basu and his colleagues took photos of all of the S. giganteum fossils — 26 bones in total — at the Natural History Museum in London. Based on size, the bones are likely from three individuals, Basu said.

"We took over 1,000 photographs of the fossils, and using a computer, we stitched these photos together" to make a virtual 3D skeleton, Basu told Live Science. Then, they used a computer program to help them estimate S. giganteum's volume, which helped them deduce how much it would have weighed.

S. giganteum was large, but not elephant-size, they found. African elephants (Loxodonta africana) can weigh more than 14,330 lbs. (6,500 kilograms). S. giganteum would have weighed about five times less, or about 2,750 lbs. (1,250 kg). However, that measurement is likely on the lower end, as it doesn't account for larger individuals or include S. giganteum's impressive headgear, which looks a bit like small moose antlers, Basu said.

The technique could be used to estimate the sizes of other extinct animals, Solounias said.

His colleague, Melinda Danowitz, a medical student at the NYIT College of Osteopathic Medicine who was also not involved in the study, agreed.

"Sivatherium has been known to be a large animal, and this paper proves that the body size exceeds that of almost all living and extinct ruminants," Danowitz told Live Science in an email. "Even though the neck is proportionally short, Sivatherium is, without a doubt, the largest giraffid discovered to date."

The study was published online today (Jan. 13) in the journal Biology Letters.