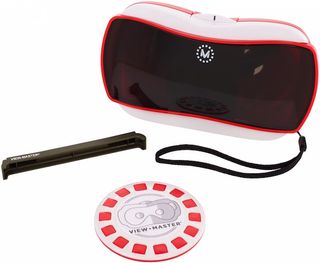 The newly released View-Master is compatible with Google Cardboard apps and allows you to see images in 3D.
(Image: © Mattel )

One of your favorite childhood playthings just got a high-tech makeover, thanks to a collaboration between toy-maker Mattel and Google.

In October, Mattel unveiled an updated version of its View-Master — a toy that traditionally resembled a pair of plastic binoculars but was fitted with cardboard "reels" of photographs or drawings that could be viewed in three dimensions. The new View-Master adds a smartphone to the mix.

To use the device, you download an app on your phone, and then place the phone inside a slot on the new View-Master, in addition to inserting a cardboard reel into the device. When you look through the device, 3D icons will seem to hover over the images on the reel (an effect that Mattel refers to as "augmented reality"). You then pull a lever on the side of the View-Master to see the next image on the reel. [Oculus Rift: 5 Virtual Reality Uses Beyond Gaming]

So far, Mattel has come out with several packs of themed reels, which the company calls "Experience Packs," including one that offers a 360-degree view of space, and another that lets you peek at wildlife from around the world. But you don't need to have any of these reels to enjoy Mattel's toy — the traditional reels still work in the new device.

The new View-Master, which was unveiled in October, is one of many virtual reality headsets to hit the market in recent years, but Mattel's device stands out because of its price. You can buy the smartphone-powered View-Master, which comes with one cardboard reel, on Amazon for just over $20. Experience Packs can be purchased separately for about $15.

Other virtual reality headsets, like the Oculus Rift or the Samsung Gear VR, cost at least $99. However, these headsets are much more comprehensive than the one from Mattel, and they aren't meant for use by younger kids.

You can read more about virtual reality headsets, including what features to look for before you buy, on our sister site Tom's Guide.

Mattel View-Master
Walmart
$29.99
View
We check over 130 million products every day for the best prices
View All Deals