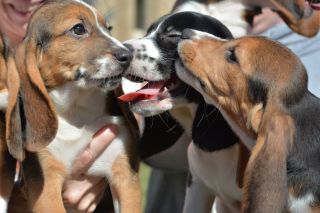 Puppies from the first litter born through in vitro fertilization. A new study by Cornell University scientists opens the door for conserving endangered species and for eradicating heritable diseases in dogs.
(Image: © Cornell University College of Veterinary Medicine)

The first-ever litter of puppies conceived through in vitro fertilization was born recently, unlocking a reproductive secret in domestic dogs that has helped researchers solve a decades-old canine biology puzzle.

The findings, published online today (Dec. 9) in the journal PLOS ONE, outline the eggs-ceptional process that produced seven healthy puppies — five with two beagle parents and two with a cocker spaniel father and a beagle mother — born by scheduled caesarian section to a host female dog.

In vitro ("outside the body") fertilization, also known as IVF, combines the egg and sperm in an artificial environment, creating an embryo that is then implanted in a host that carries it to full term. [See Photos: Fertility Egg-speriments Yield Litter of Playful Pups]

IVF has been successfully practiced for decades, with the first IVF rabbits born in the 1950s and the first human "test tube baby," Louise Brown, born in 1978 in the United Kingdom. By the 1980s, IVF in domestic cattle produced "tens of thousands of pregnancies and offspring," according to a study published in the Journal of In Vitro Fertilization and Embryo Transfer in 1987.

But decade after decade, IVF success in dogs remained elusive, primarily because when it comes to reproduction, dogs are weirder than you might expect.

Dogs only come into heat once or twice a year, which creates unique scheduling challenges for scientists studying fertilization and pregnancy. But, Travis added, there's another peculiar detail that's exclusive to canine reproduction — when a female dog ovulates, the resulting egg isn't exactly ready to be fertilized right away.

In most mammals, an egg enters the fallopian tubes primed for fertilizing. Female dogs, however, produce immature eggs that must hang around in their oviducts for one or two days before they're viable, Travis said. Giving the immature eggs — or ovocytes — the extra time they needed to mature was one of the keys to the team's eventual IVF success, he added. [First Puppy Litter Born by In Vitro Fertilization | Video]

But successful fertilization eluded the researchers even when they allowed for extra maturation time. Travis suspected that the sperm in their IVF equation was the culprit. He told Live Science that they went "back to the drawing board" to look at the first papers on IVF in dogs, and to take a closer look at their findings about sperm.

Magnesium turned out to be a crucial missing ingredient. An early study, Travis said, reported that magnesium prevented sperm's heads and tails from developing in the way that they needed in order to penetrate an egg. Researchers from that study recommended omitting magnesium from IVF's chemical marinade.

But the Cornell scientists found that conclusion to be only partly correct. While magnesium halted the sperm's progress when development happened "spontaneously," outside the oviducts, the researchers found that adding magnesium actually stimulated the sperm once their development was already underway, which typically happens when sperm interacts with the scrum of cells surrounding an egg, Travis said.

And that combination did the trick, raising the fertilization rate to "80 to 90 percent," Travis said in a statement. Once the researchers had the embryos, the final step was to freeze them, in preparation for implanting them in the host dog during the proper stage of her cycle.

Going to the dogs

While the successful birth is cause enough for excitement, additional prospects promise other applications for IVF in domestic dogs. Combined with gene editing, IVF could mean a brighter future for breeds that suffer from inherited diseases, allowing scientists to nip genetic defects in the bud, prepping generations of embryos to develop disease free, the study authors suggest.

The study could even inform future studies of genetic diseases in humans. Dogs share more than 350 hereditary traits and diseases with humans, "almost twice as many as any other species," Travis told Live Science. "Doing these things in dogs is a way to improve dog health, but also a way to test things out before you try it in a person. That’s one of the real values of the dog as the model," he added.

The success of IVF in domestic dogs also kindles hope for preserving the genetic diversity of endangered canids. Travis described a collaborative effort by Cornell, the Smithsonian and the San Diego Zoo to amass frozen-tissue samples, including eggs and sperm, for a number of threatened species. IVF could someday offer those genes a "second chance," helping researchers to develop embryos to implant in living animals.

"We certainly hope that this work in a domestic dog will provide a good starting point for studies in other species of dog," Travis said.