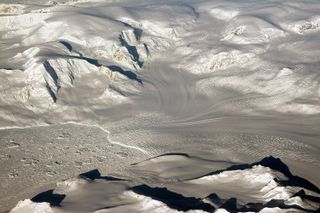 A view of glaciers and mountains covering West Antarctica, as captured from above on Oct. 29, 2014.
(Image: © NASA/Michael Studinger)

NASA recently released a study suggesting that the Antarctic Ice Sheet is gaining more ice than it is losing — a finding that, at first blush, seems to contradict the idea of global warming. So, how can Antarctica be gaining ice mass in a warming world where ice sheets are collapsing and the melting is predicted to increase sea levels across the globe?

It turns out that the two phenomena — a growing ice sheet and warming-related melting — are not mutually exclusive. Moreover, the NASA study, which was published Oct. 30 in the Journal of Glaciology, does not disprove global warming.

Rather, the researchers found that snow accumulation is adding more ice to East Antarctica (the huge chunk of the continent to the east of the Transantarctic Mountains) and the interior region of West Antarctica than is being lost as glaciers across Antarctica thin out. More snow accumulation is, counterintuitively, a sign of global warming; more precipitation happens when there is more moisture in the air, and more moisture in the air is a product of higher temperatures, said Elizabeth Thomas, a glaciologist with the British Antarctic Survey. [Infographic: Your Guide to Antarctica]

The NASA researchers made their observation on the current state of the Antarctic Ice Sheet — which covers an area roughly the size of the United States and Mexico combined — by taking altitude measurements using data collected by the European Remote Sensing (ERS) satellites between 1992 and 2001 and using the Ice, Cloud and land Elevation Satellite (ICESat) between 2003 and 2008.

The ERS satellites were equipped with radar altimeters, whereas the ICESat had a laser altimeter. An altimeter measures elevation by shooting a beam of radio waves (radar) or a beam of light (laser) to the ice surface. The altimeter records the time it takes the waves to bounce off the surface and back to the satellite. The higher the elevation, the quicker the return time, and vice versa. [See Stunning Photos of Antarctic Ice]

Then, the researchers mapped out how ice elevation had changed over time. They found that, although certain areas of Antarctica, such as the Antarctic Peninsula and the coastal parts of western Antarctica, are losing more ice than they are gaining, overall, the continent's ice is growing.

Controversy over the study

However, although the findings don't negate climate change or suggest warming is slowing down, they have been met with some pushback from the scientific community.

For example, the study doesn't include current data, leading some scientists to question whether the results are meaningful.

The most recent data in the study was from 2008, noted Michael Mann, a climate scientist at Pennsylvania State University. Many of the recent studies that demonstrate the range of ice loss take more recent data into account, Mann told Live Science. The study "is making a statement about the way things are today [using] a data set that is seven years out of date," he said. "If they used data that was up-to-date, they would find a higher rate of loss," Mann noted.

Mann also mentioned that he knows of several ice experts who are a little skeptical of the elevation measurements in certain regions, such as the region surrounding Lake Vostok. Regions near large bodies of water have highly variable elevations because of the presence of liquid water, and it's not clear whether the NASA study accounted for this. [See Photos of a Subglacial Lake in Antarctica]

The results also contradict a finding detailed last year in the journal Earth and Planetary Science Letters, in which Christoper Harig, a geoscientist at Princeton University, and his colleagues found a net loss of ice covering Antarctica. They relied on GRACE measurements for their study.

Jay Zwally, a glaciologist with NASA Goddard Space Flight Center in Greenbelt, Maryland, and colleagues said in their Journal of Glaciology paper that the new results are more accurate than those in Harig's Gravity Recovery and Climate Experiment (GRACE) satellite study because they are based more on ICESat measurements, which according to Zwally, are better at adjusting for the rise and fall of land that happens when ice has been removed or added to it, respectively — a phenomenon called glacial isostatic adjustment (GIA). When ice melts, the land beneath it rebounds slightly as the weight is removed. It's critical to account for that rebound when measuring elevation, scientists say.

"This paper, which uses laser altimetry, claims the discrepancy between our results is due to recent GIA model corrections being incorrect, and that GRACE is more sensitive to error," Harig wrote in an email to the Washington Post, according to this WaPo report. "If we added back the GIA corrections, and compare our results, then their estimates should agree with ours because we measure mass directly. Instead, they are still very far away."

However, Mann said that, although the consensus among climate scientists is that Antarctica is, indeed, losing more ice than it is gaining, the new NASA study still demonstrates good science.

"This is the way science works; the scientific community is doing its best to understand and reconcile [the NASA study data]," he said. Even if the results can't be verified, Mann said, the research was conducted in good faith and shouldn't be dismissed as unimportant to the greater body of work.

"East Antarctica is not warming as fast as West Antarctica — that's the part of Antarctica that is the most susceptible to ice loss," Mann said. In 2007, researchers reported in the journal Geophysical Research Letters that they had found a link between this phenomenon and the ozone hole over Antarctica. Depleting ozone in the upper atmosphere changes wind dynamics there, Mann said. That change causes a strengthening of the jet stream and the polar winds, but it also traps the cold air in the regions around East Antarctica, creating a cooling effect.

As the ozone hole has gotten smaller, this cooling effect has mostly disappeared, Mann said, meaning that even East Antarctica will have warming rates comparable to global warming rates soon.

Zwally also noted that if the warming were to continue at current rates, the ice gains that the NASA study found would not continue. In other words, the melting would increase enough to offset the large amounts of snow building on the surface.

Other research has started to look at older records of Antarctica's climate, in order to place current data into historical context. Doing so can help scientists better understand how current observations fit into the larger story of Antarctica's climate. In a separate study, published Nov. 4 in the journal Geophysical Research Letters, researchers studied the climate of West Antarctica over the past three centuries by looking at ice core records. The researchers found that snow accumulation in the 20th century had been significantly higher than in the previous two centuries looked at in the study.

"It looks as though [this trend] is related to there being more storms [in West Antarctica]," said Thomas, of the British Antarctic Survey. "Just because [West Antarctica] is getting more snow doesn't mean that [the ice sheet is] getting thicker."

She explained that both higher snow accumulation and thinning ice sheets are results of the same regional warming phenomenon. The amount of precipitation is tied to the amount of sea ice in the region. "When we had a lot of sea ice, we don't have so much moisture," she said.

It's clear that studying climate change is a complicated endeavor, but any climate scientist will stress the importance of understanding what's happening to Antarctica. "In terms of climate, [the process] is hugely complex, and [there is] a lot going on," Thomas said. It will take a lot of research to get a better understanding of what's happening there because records of the region date back only decades.

Editor's Note: This story was updated to show that the NASA study used ERS satellite data, not GRACE satellite data, between 1992 - 2001. GRACE was not launched until 2002.