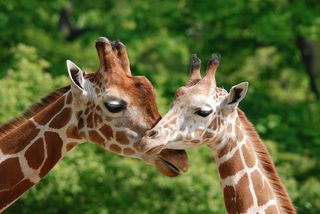 Giraffes are the tallest animals in the world, with males reaching heights of 18 feet (5.5 meters).
(Image: © meunierd / Shutterstock.com)

With their treelike height, thin legs and awkward locomotion, giraffes are the epitome of the word "gangly." But do their sexual behaviors involve smoother actions than one would assume from their appearance?

Like people, giraffes mate year-round, though there's some indication that breeding times correspond with periods of high food availability. The tall ungulates live in a so-called fission-fusion society, in which the size and the composition of herds continually shift — the social mammals use this ever-changing society to find mates.

"The best way to describe it: Giraffes live in a permanent cocktail party," said Fred Bercovitch, a biologist at Kyoto University in Japan who has studied the reproductive and social behaviors of giraffes. "At a cocktail party, you'll see there are some people who are really social butterflies and spend a little bit of time mingling with a lot of people, and others who spend more time with fewer people."

And then there are some that are on the lookout for a one-night stand. Similar to the way a person might walk around a party and chat with people to see who's interested, a male giraffe will move through a herd to find females that are receptive to mating, Bercovitch told Live Science.

This sexual hunt involves the male prodding the rear ends of different females with his head. Some females will respond by spreading their legs and urinating, sparking a so-called flehmen response from the male — he will lift his upper lip, flare his nostrils and inhale. In addition to sniffing the urine, he may even taste it, taking in additional chemical cues to see if the female is ready to mate. [Most Mammals Take 21 Seconds to Pee]

Female giraffes have a two-week estrous cycle, but are only fertile for a narrow window of fewer than four days during this period (this cycle will repeat until the female gets pregnant). Urine testing allows the male to find females in this fertile window, Bercovitch said.

Once a male finds a fertile female, he "stands behind her and looks like a statue," Bercovitch said. The female may choose to walk off, possibly to feed, but the male will follow her to stand behind her again, often with an erection the entire time.

To let her know he's ready to mate, he will occasionally tap her hind legs with his forelegs.

Though males do fight over dominance and territory by viciously swinging their heads (and hornlike "ossicones") into each other's bodies, it's unknown if males fight over mates. "Nobody has found two big male bulls fighting and the winner goes over to the female," Bercovitch said. [See Cute Pictures of Baby Giraffes]

It's unclear what qualities, if any, a female looks for in a mate. Given the narrow window available to get pregnant, a female may simply mate with any bull that has survived long enough to reach full adulthood, Bercovitch said.

Whatever the case, the female has to cooperate for mating to occur — she has to delicately balance a mate that could weigh as much as 50 percent more than her, as he mounts her from behind.

After successfully mounting a female, the male ejaculates almost immediately, typically in less than 2 seconds.