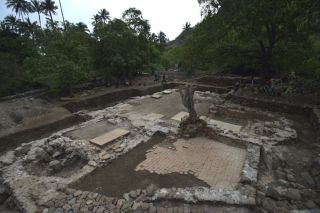 This is the site of the excavation of the earliest church yet discovered in sub-Saharan Africa, with some of the structure dating back to the late 15th century.
(Image: © Cambridge Archaeological Unit)

Archaeologists have uncovered a 500-year-old church that may be the oldest known European Christian church in the tropics.

Deformed by floods and possibly visited by famed naturalist Charles Darwin, the church had been built by Portuguese colonizers in Cidade Velha, the former capital of the Cape Verde Islands off the coast of West Africa. The historic settlement was recently made a UNESCO World Heritage Site.

There are upward of 1,000 bodies, many of them likely slaves, buried underneath the nave of the church. For hundreds of years, Cape Verde was a place where African slaves were held and sold before being sent to Portugal and the Americas. That ugly industry made Cidade Velha, at its peak, the second richest city in the Portuguese empire. [8 Grisly Archaeological Discoveries]

Darwin’s most famous stop during his long voyage aboard the HMS Beagle may have been the Galapagos Islands in the Pacific Ocean. But his first port of call was a different volcanic archipelago that was uninhabited until the 15th century: Cape Verde.

Darwin was unimpressed with what he saw. However, among his disparaging remarks about Cape Verde and its people, he mentions visiting the ruins of a church:

"This little town, before its harbour was filled up, was the principal place in the island: it now presents a melancholy, but very picturesque appearance. Having procured a black Padre for a guide, and a Spaniard who had served in the Peninsular war as an interpreter, we visited a collection of buildings, of which an ancient church formed the principal part. It is here the governors and captain-generals of the islands have been buried. Some of the tombstones recorded dates of the sixteenth century. The heraldic ornaments were the only things in this retired place that reminded us of Europe. The church or chapel formed one side of a quadrangle, in the middle of which a large clump of bananas were growing. On another side was a hospital, containing about a dozen miserable-looking inmates."

Over the last year, archaeologists from Cambridge University have revealed a ruined church in what may be the first major excavations to take place at Cape Verde. Christopher Evans, director of the Cambridge Archaeological Unit, thinks the church is likely the same one that Darwin described.

For a city built on the slave trade, Cidade Velha had a lot of Christian churches. The newly revealed building, which probably could have fit about 75 people, was just one of about two dozen churches and chapels in the small river valley where Cidade Velha is located, Evans said.

"Religion was an integral part of early Portuguese colonialism," Evans told Live Science. "People were competitively building churches. You also have religious orders establishing themselves in the early 16th century, and Cidade Velha becomes the seat of the bishopric of Africa."

Slaves may not have been excluded from religious life in Cape Verde. Already, isotope analyses of teeth suggest that many of the people buried under the church were African, and likely slaves.

"The fact that they're getting a church burial could be evidence that converting the slaves to Christianity meant something," Evans said. Further investigation of the bones could reveal more about the work conditions and the diets of the slaves, shedding light on slavery in a late medieval context.

While the main church was built during the decade straddling 1500, there are some early stone foundations from a Gothic chapel that date back to around 1470, which would make it the earliest building on the Cape Verde islands, Evans said.

Since the colonizers were the first people to inhabit the island, they had no knowledge of the local environment, and they made some critical mistakes when building the church. First, they built it on top of a seasonal stream course. Second, the church was located at the bend of a river. These factors made the building vulnerable to flash floods, and the church had to be rebuilt twice in the 16th and 17th centuries, Evans said.

"Instead of being a normally proportioned church, it became a rather fat, squat church," Evans said. "It’s a reflection that they didn't understand the landscape they were in."

Pirate attacks eventually caused the downfall of Cidade Velha in the 18th century, but this church was likely reduced to ruins by floodwaters.

"Everyone attributes to demise of Cidade Velha to pirates," Evans said. "In this case, it’s actually nature."