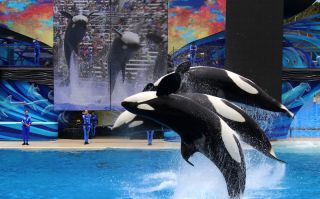 SeaWorld San Diego, long known for its live killer-whale shows, will begin phasing out the performances next year in favor of conservation-based shows, company representatives announced yesterday (Nov. 9). SeaWorld has come under attack in recent years over how it treats the captive whales, but experts say the company's new approach could foster new interest in protecting the species.

"In 100 years, we'll look back and be disgusted by how we treated [the whales]," said marine biologist Ted Phillips, who studied marine mammals and their mental capacities at Duke University.

SeaWorld said it is aiming to promote marine education and will implement a more natural setting for the killer whales. Phillips agrees that firsthand experience is one of the best ways to garner interest in conservation. [Whale Album: Giants of the Deep]

"Getting kids exposed to the outdoors and engendering an emotional connection — that's the best way to get people caring about the environment," he told Live Science.

But Phillips is adamant about not personally giving patronage to SeaWorld, and he doesn't agree with the company's policies on animal captivity. He thinks there are simple and digestible conservation issues — such as by-catch regulations that protect killer whales from accidentally being captured or injured from fishing gear — that can be presented to the public without capitalizing on the entertainment factor.

"Whale shows aren't the only way to get people interested in marine science," Phillips said.

After the 2013 documentary "Blackfish," which suggested that the park's treatment of its killer whales triggers violent behavior in the animals, SeaWorld has struggled to rebuild its image.

Although it's clearly a controversial subject, Jennifer Roberts, a marine biologist at the Rosenstiel School of Marine and Atmospheric Science at the University of Miami, emphasized the benefits of parks like SeaWorld. Growing up in New Jersey, Roberts was not in close proximity to cetaceans and other large marine mammals. She visited SeaWorld for the first time as a child, and her experience sparked a lifelong interest in marine wildlife and research.

She thinks that, as long as regulations are upheld, places like SeaWorld are essential vectors for inspiring future conservationists. "People need to physically see the animals to want to conserve them," she told Live Science.

Roberts also said SeaWorld provides behind-the-scenes benefits that aren't always visible to the public but have always been a significant part of the organization, including stranded-animal call teams and rehabilitation centers.

Roberts' only concern about SeaWorld reworking its programming is that killer whales are highly social animals, and the shows provide them with tasks and opportunities for interaction. Roberts hopes the whales will still have opportunities to use their brains and avoid boredom.

Simone Baumann-Pickering, an assistant researcher with the Scripps Institution of Oceanography at the University of California, San Diego, said the controversy surrounding SeaWorld is still morally ambiguous, but she thinks the company's rebranding efforts are positive steps.

The California Coastal Commission recently introduced a bill that would ban California properties from breeding killer whalesin captivity, which, if it were to become law, would likely limit SeaWorld's growth. Roberts said that even with the potential benefits of parks like SeaWorld, overcrowding is an important issue. Roberts thinks the organization should focus on having the fewest animals necessary to do the intended job.

Still, there is a need for both researchers and organizations like SeaWorld to focus on conservation in any way they can, Baumann-Pickering said. Ultimately, she thinks the company's success should be measured by how much outreach it can achieve while still maintaining the health of the animals in captivity.