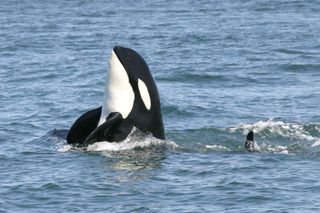 A killer whale jumps from the surface of the water.
(Image: © (c) Rob Williams, under permit)

"Blackfish" is making ripples in California.

A state lawmaker proposed a bill Friday (March 7) that would end SeaWorld's killer whale shows, according to the San Diego Union-Tribune.

Assemblyman Richard Bloom, a Democrat from Santa Monica, was reportedly motivated to act by the 2013 documentary "Blackfish," an unflattering portrayal of the safety and wellbeing of the animals and trainers at SeaWorld's marine parks.

"There is no justification for the continued captive display of orcas for entertainment purposes," Bloom said in prepared remarks, according to the Union-Tribune. "These beautiful creatures are much too large and far too intelligent to be confined in small, concrete tanks for their entire lives."

"Blackfish" was made in the aftermath of the death of Dawn Brancheau, a veteran trainer who was killed by an orca named Tilikum at Sea World Orlando. SeaWorld officials refused to participate in the making of the film, but since it's release, they've fiercely disputed the documentary's claims.

In a response to Friday's news, SeaWorld officials said: "In addition to being one of the most respected members of the business community, SeaWorld also is a global leader in the zoological and animal welfare world. We are deeply committed to the health and wellbeing of all of our animals and killer whales are no exception."

The new law would reportedly ban captive breeding of killer whales in California and the import and export of the marine mammals. It would also end the performances of orcas in theme shows.