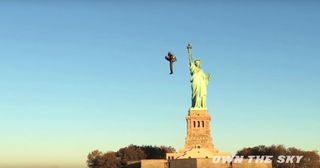 Australian entrepreneur David Mayman buzzed the Statue of Liberty in New York City during a jetpack demonstration on Nov. 3, 2015.
(Image: © Screenshot via YouTube)

A man wearing a jetpack soared across the Hudson River in New York City on Tuesday (Nov. 3), looping around the Statue of Liberty before landing safely on the deck of a boat.

The jetpack-wearing joyrider was David Mayman, an Australian entrepreneur who has spent the past 10 years designing and building prototypes of the wearable flying device. He's been helped in this effort by Nelson Tyler, a Hollywood-based inventor best known for developing helicopter camera systems and other movie-ready technologies, three of which have earned him Academy Awards.

Mayman and Nelson's lightweight pack, dubbed the JB-9, is small enough to fit in the trunk of a car, but it's powerful enough to rocket its wearer 10,000 feet (3,050 meters) above the ground and can hit speeds of 63 mph (102 km/h). [Hyperloop, Jetpacks & More: 9 Futuristic Transit Ideas]

A pilot can fly with the jet turbine-powered backpack for about 10 minutes before the device needs to be refueled. This meant Mayman had plenty of time to pull off a few cool maneuvers during the JB-9's first-ever public flight.

"There were a few different flight maneuvers that I tested [during the flight] — abrupt stops and turns," Mayman told Live Science. "Also, I saluted the Statue of Liberty."

The JB-9 pack works just fine, but Mayman and Nelson (along with the other team members at their company, Jetpack Aviation) have already developed a new model of the jetpack, the JB-10. The new flying machine will function similarly to the JB-9, but it will also be quite a bit faster, zooming its pilot across the sky at a breakneck speed of 100 mph (160 km/h).

This increase in speed will be coupled with added safety features, Mayman said. Jetpack Aviation is working on automated systems that can deploy balloons or parachutes if the pilot loses elevation. Right now, the only pilot who may benefit from these systems is Mayman himself, because he's the only one who knows how to fly the company's jetpacks. But that may soon change; Jetpack Aviation is also developing a flight simulator that will help teach new pilots how to use the JB-9.

Still, it's not yet clear who these new pilots will be, but Mayman speculated that the people most likely to benefit from having a jetpack are those who "need speed." The device's small size (remember, it fits in the back of a car) also makes it convenient to use from anywhere.

For example, the military may want to use jetpacks to deploy troops into remote areas, Mayman said. And more than one person in Hollywood has already noted that this futuristic technology could be a star on the silver screen, he added.

Of course, the average person won't be able to go out and buy one of Jetpack Aviation's wearable flying devices anytime soon. (However, another jetpack manufacturer did recently announce that its packs will be available for purchase next year.) But one day, the company might design an automated, self-stabilizing pack that doesn't require any special training to use, Mayman said. When that day comes, expect to see more than one high-flying jetpacker saluting the Statue of Liberty.