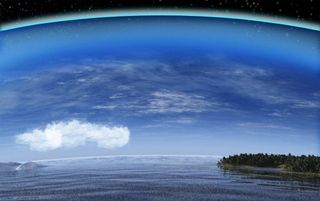 Raghu Murtugudde is a professor at the University of Maryland's Earth System Science Interdisciplinary Center (ESSIC) and the Department of Atmospheric and Oceanic Science. He is currently a visiting professor at the Indian Institute of Science Education and Research in Pune, India. Murtugudde contributed this article to Live Science's Expert Voices: Op-Ed & Insights.

When living standards visibly contrast — such as in crowded urban centers, where slums are scattered amid wealthy neighborhoods — studies have shown cooperation between the rich and the poor falters. In the context of climate change, this lack of cooperation between rich and poor manifests itself in international negotiations.

Wealthy countries tend to ignore the issues and voices of poor countries , which often tend toward the immediate and existential — education and health care, for example. It's a situation made ever more tragic since loss of life due to climate extremes tends to be high in poor countries, where recovery from natural disasters is also slower.

2015 may be a critical year for humanity to fix that disconnect, with major efforts to smooth out the lack of trust between rich and poor nations. This year, the global community will try to flesh out a democratic agreement on climate action and develop common targets to elevate the poor, and women, from abject poverty.

The follow-up agreement to the now-expired Kyoto protocol will be finalized at the Conference of Parties-21 (COP21), to be held in Paris in December under the auspices of the United Nations Framework Convention on Climate Change.

The world is still coming to grips with the latest assessment report issued by the Intergovernmental Panel on Climate Change (IPCC) in 2014, which states with higher certainty than ever that climate change is caused by human activities . Despite the continuing efforts by the climate skeptics, survey after survey show that communities across the globe support actions to tackle climate change.

Some climate scientists are increasingly alarmed by the glacial pace of negotiations under COP and are calling for more authoritative approaches to take action on climate change. This debate is cast as an earnest effort to save the planet, but is often dominated by the Global North, i.e., developed economies such as the United States and Europe (and Australia, despite its geographic location), and perceived as a barrier to their development by the Global South represented by growing economies such as those in Africa, India, China, and Brazil.

However, in a recent policy analysis for the journal Nature, Nico Stehr of the European Center for Sustainability Research notes that many scientists are advocating imposing ad hoc and broad limitations on emissions, and he sounded a cautionary note against sidestepping democracy by ignoring the needs and demands of the Global South in adapting to climate impacts.

This caveat is a reminder of the paradox first noted in the 1940s by economics Nobel laureate Friedrich Hayek: Society tends to associate scientific advances with a desire for increased control of human activities — which is now seen in various forms of data tracking by technology, perfect for maximizing consumption. There is a sense of information overload due to increasingly alarming daily headlines about climate change impacts on the air we breathe, the water we drink and the food we consume. Since there are no clear and tangible solutions offered, there is the danger of a creeping sense of "impossible" imposed on our way of life.

While climate warming may be global, the majority of impacts will be local. No human lives in a global mean, or average, climate, or experiences global mean temperature, or faces global mean sea level rise. Global warming will almost certainly create beneficial effects for some environments and economies, thus creating winners as well as losers.

Those complexities will give rise to dissenting voices in discussions of how to deal with climate change, and world leaders must resolve to hear these voices carefully. Two examples highlight this disparity beautifully and succinctly. One is an annual survey of a representative sample of more than 1,000 U.S. residents regarding climate change views in this country — a wealthy, developed, democratic nation — and the other is a global survey of more than a million people, 80 percent of whom live in developing countries. [5 Places Already Feeling the Effects of Climate Change ]

Global Warming's Six Americas is the ongoing U.S. survey, conducted by Yale University and George Mason University, and it divides citizens based on their sense of urgency related to climate change. The six categories are alarmed, concerned, cautious, disengaged, doubtful and dismissive. The survey has tracked the opinions and attitudes of these six Americas since 2008.

Importantly, five of the six Americas rank improved public health as among the top benefits of reducing fossil fuel use. Even though "alarmed" America has grown and "dismissive" America has shrunk since 2008, all six categories expressed concern about increased government regulation and higher energy prices as a result of actions to combat global warming.

The six Americas also differ in their opinion of who influences the legislators most: media, campaign contributors, energy companies or individuals. However, all six Americas seem to agree that action is needed and that they would support measures such as revenue-neutral carbon taxes, meaning the proceeds would be used to create green jobs, pay down the national debt, or decrease pollution by promoting cleaner energy options.

The My World global survey was conducted by the U.N. and the Overseas Development Institute, a U.K.-based independent think tank focused on international development and humanitarian issues. That survey predominantly captures the voices of the poor from developing countries.

As other surveys and studies have found, the results of this survey suggest that climate change is not a high-priority issue for the poor. But surprisingly, poverty reduction and international aid received similarly low-priority rankings.

Rather, the poor assign the highest priority to education, health care, job opportunities, and honest and responsible government. These voices have clearly not been heard by the developed nations of the U.N., who formulated the Sustainable Development Goals and gave top billing to the eradication of poverty worldwide by 2030.

The U.N. defines extreme poverty as an income of less than $1.25 a day, whereas the My World survey shows that people measure poverty relative to the average income of their community. Those in poverty do recognize that climate change will affect their top priorities, in part by exacerbating their dependence on science and technology created by the developed world.

A global effort to fix the climate

Combating global warming is clearly a noble and necessary goal. It is indeed a testimony to the global spirit that the entire world is participating in COP21, where all leading polluter nations will offer their Intended Nationally Determined Contributions (INDCs) to the global reductions in carbon emissions.

The INDC is a new, bottom-up framework for continued global action against global warming and offers an alternative to the generally failed top-down approach taken under the Kyoto protocol. The INDC lets the nations define their role in helping keep the global temperature rise within 2 degrees Celsius of temperatures at the beginning of the Industrial Revolution.

The process is aimed at being more democratic: It allows nations to commit to emission reductions with explicit adaptations to climate change impacts and renewable energy growth — within the context of each nation's capabilities and priorities, and the support they'll need to get there. This development is just another indication of the robustness of democracy and its global success in engendering global participation.

In an even more heartwarming signal of the human spirit, many large corporations like the United Parcel Service, Pepsico and Siemens have developed and implemented their own plans to reduce their emissions as well as water and energy usage. We need to be more vigilant at the local level, and resolve to hear what prosperous and poor individuals alike see as priorities as we continue to work toward common goals for the planet.

The Global North-South divide is the most serious impediment to global actions on issues such as climate change that threaten the global commons. Just as an airplane cannot be made safer just for those in first class, Earth cannot be made safer just for the rich countries as climate-change impacts begin to multiply and grow. Democratic governance at the global level is the only tool for success, and the most consistent with human dignity.