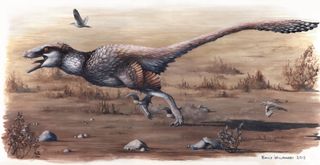 An illustration of Dakotaraptor steini running with sparrow-size birds (Cimolopteryx petra) during the Late Cretaceous, about 66 million years ago.
(Image: © Emily Willoughby)

Sixty-six million years ago, a giant raptor with feathered arms chased prey around the ancient South Dakotan landscape, according to a new study.

Researchers named the newly identified species Dakotaraptor steini, after the state and the Dakota First Nations Tribe, as well as raptor, which is Latin for "plunderer." The species name also honors paleontologist Walter Stein, said the researchers, who found the remains in South Dakota's Hell Creek Formation, a famously fossil-rich area.

Dakotaraptor is one of the largest known dromaeosaurids (raptors) on record, according to D-Brief, a Discover Magazine blog. An analysis of the dinosaur's partial skeleton suggests it measured 16 feet (4.9 meters) long, making is larger than the turkey-size Velociraptor, but smaller than the 22-foot-long (6.7 m) Utahraptor, D-Brief reported. [Images: These Downy Dinosaurs Sported Feathers]

Dakotaraptor also had "quill knobs" or papilli, on its ulna (arm bone), which "is our first clear evidence for feather quills on a large dromaeosaurid forearm," the researchers wrote in the study, published online Oct. 30 in the journal Paleontological Contributions. It's unlikely Dakotaraptor could fly given its large size, but perhaps it used its feathers for display or to keep its eggs warm, D-Brief reported.