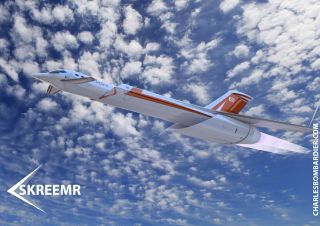 How'd you like to travel from New York to London in less than an hour? One imaginative inventor has developed a concept plane that could take passengers across the pond in just 30 minutes — at least in theory.

The aircraft concept, dubbed the Skreemr, is the brainchild of Charles Bombardier, an engineer and inventor who writes about his futuristic prototype designs in the Canadian newspaper The Globe and Mail. Bombardier's latest design describes a passenger aircraft that can travel at 10 times the speed of sound, or just under 8,000 mph (12,348 km/h).

If such a jet were ever built, it would be five times faster than the Concorde, a now-retired supersonic passenger jet that once soared through the sky at speeds reaching Mach 2.04 (more than twice the speed of sound, at 1,565 mph, or 2,519 km/h). [See photos of the hypersonic Skreemr jet concept]

To reach its incredible Mach 10 speed, the Skreemr jet would have to take off from a "magnetic rail-gun launching system," Bombardier explained in a recent column for The Globe and Mail. Rail guns consist of two conductive rails that produce an electromagnetic field that can propel a vehicle forward at high speed (kind of like a maglev train). Once this launching system gets the plane moving faster than the speed of sound (more than 767 mph, or 1,235 km/h), the jet's liquid oxygen and kerosene rockets would ignite, Bombardier said.

The Skreemr's rockets would keep the plane climbing in altitude and would thrust it forward at speeds reaching Mach 4 (more than 3,000 mph, or nearly 5,000 km/h). Finally, the plane's scramjet engine would ignite, burning up hydrogen and compressed oxygen to propel the plane forward at speeds surpassing Mach 10 (more than 7,600 mph, or 1,220 km/h), Bombardier said.

Like regular jet engines, scramjet (short for supersonic combusting ramjet) engines combine liquid fuel with oxygen to create thrust, according to NASA. But in a scramjet engine, oxygen doesn't come from a tank onboard the aircraft; it comes from the atmosphere that is passing through the vehicle as it moves through the air.

The futuristic concept plane could carry about 75 passengers at a time, but these hypersonic travelers won't be taking off in the Skreemr anytime soon. While scramjet engines are currently under development in the United Statesand China, real-life applications of these devices are still a long way away. And as Bombardier pointed out in his recent post, scramjets are likely to be used on unmanned aircraft, like military drones, long before anyone straps them to a commercial aircraft.