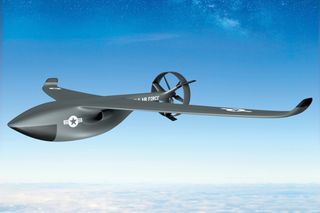 An artist's rendering of what the small, fuel-efficient turbine engine might look like on a drone.
(Image: © U.S. Air Force)

The U.S. Air Force is offering $2 million to whoever can design a new and improved engine to power its airplanes.

The competition, known as the Air Force Prize, is open to American citizens and permanent U.S. residents age 18 and older, as well as corporations and research institutions in the United States. The goal of the contest is to speed up the development of a lightweight, fuel-efficient turbine engine, or jet engine, to power the aircraft of the future.

This is the first time the Air Force, or any other branch of the U.S. military, is offering a prize to stir up technological innovation among the general public, said Lt. Col. Aaron Tucker, deputy chief of the turbine engine division at the Air Force Research Laboratory (AFRL). [Supersonic! The 10 Fastest Military Airplanes]

"The secretary of the Air Force is really looking for innovative ways to acquire systems and technology," Tucker told Live Science.

Even though the AFRL is chock-full of "really smart people," Tucker said Air Force engineers don't own the market on new turbine engine designs. And asking Americans to invent new military technologies in exchange for cash is already a proven way of conducting research and development projects — just look at the Defense Advanced Projects Research Agency (DARPA).

That agency, the research branch of the U.S. Department of Defense, holds "prize challenges" that invite Americans (and members of the international community) to find novel solutions to complex military-related problems, such as how to design two-legged robots that can perform useful tasks without falling over or how to get a bunch of little drones to land inside an airplane.

But the objective of the Air Force Prize is a bit different from that of most DARPA challenges. Contestants aren't actually designing something new; they're redesigning something old so that it can be used for new purposes, Tucker noted.

Turbine engines have been used inside most large Air Force aircraft since around 1948. Before that, the planes that transported troops, carried weapons and conducted surveillance had piston engines (the same kind of engine found in most cars), Tucker said.

A kind of internal combustion engine, piston engines work using a supply of hot air and fuel to build pressure inside the engine to move a piston, or cylinder, which, in turn, moves a handle (called a crankshaft) and generates power.

But turbine engines, also known as gas turbines, work by using a high-speed fan that sucks air into the engine, where it is compressed, mixed with fuel and then ignited. The burning gases expand inside the engine and shoot out the "nozzle" at the back of the engine. As a result, whatever the engine is attached to is propelled forward, according to NASA.

Both piston and turbine engines have advantages and disadvantages, Tucker said. The main advantage of gas turbines is that they're much lighter than piston engines, but the smaller a gas turbine is, the less fuel-efficient it is, he added.

This is where the Air Force hopes to find innovative new ideas.

"What we're trying to do is align the fuel efficiencies from a piston engine, match that with being lightweight and end up with a lightweight, fuel-efficient turbine engine," Tucker said.

To register for the contest, participants need to submit a design idea to the AFRL, where experts will decide if the design is really that of a turbine engine. But rather than defining exactly what would qualify as a turbine engine in the contest rules, the AFRL decided to leave the definition open to interpretation to allow for greater innovation from participants.

To win the $2 million prize, participants must haul their engine prototypes to the AFRL, located at the Wright-Patterson Air Force Base in Ohio. Engines must pass the same 6-hour test two times. If the engine prototype can work more than once, it's likely worth developing further, Tucker said.

The winning engine (or the first to pass the AFRL's round of tests) will not be purchased by the Air Force because $2 million isn't enough money to pay for the intellectual property rights of this kind of technology, Tucker explained. Instead, the Air Force is promoting the contest with its industry partners (companies like Boeing and Raytheon), in the hope that these partners will purchase the new turbine engine design, continue developing it and, eventually, start incorporating it into future models of military aircraft.

Additional details about the Air Force Prize, plus instructions for how to register for the competition, can be found on the contest website.