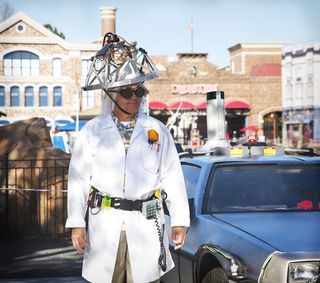 With Halloween less than a week away, science nerds everywhere are scrambling to put the finishing touches on their costumes. But if you've waited until the last minute to throw an outfit together, don't worry. There's still time to assemble an appropriately geeky getup in time for this weekend's festivities. Here are a few science-themed ideas to get you started.

It's invisible, intangible, misunderstood and sometimes misrepresented. What is it? It's dark matter, of course. This nonluminous material (it doesn't produce any light of its own) is thought to make up about 27 percent of the universe, according to NASA.

A Halloween costume depicting dark matter can pretty much look however you want it to look, because no one knows what dark matter really is. But if you want people to get a general sense of darkness and mystery, here's what you'll need: black tights, a black shirt, black stockings (for your head) and a pair of black slippers. [Photos: The Best Science-Themed Halloween Costumes]

Adorn yourself in these articles of clothing, and then slink around the party, saying mysterious things like, "Are my axions showing?" Also, be sure to do a lot of unpredictable things, like grab people and hold them in one place (explain that dark matter was once believed to be a sort of "glue" that held galaxies in place) and then push them away (explain that astronomers are no longer sure that dark matter actually serves as an anchor for anything).

It's October 2015, which makes a "Back to the Future"-themed costume most fitting this Halloween. If you're not familiar with the famous time-traveling trilogy, 2015 was the year in the future that Marty McFly visits in "Back to the Future Part II."

You could build a hoverboard and go as McFly, but if you want to embrace your inner mad scientist, then Doc Brown is the better option. You'll need just a few things to create the look: a lab coat, a Hawaiian shirt, frizzy hair (preferably white), and any old electronic device with an antenna or an enormous old cell phone.

To really sell this costume, keep your eyes wide open, and be sure to use the expression "Great Scott!" intermittently throughout the evening. Also, refer to all iPhones as flux capacitors (that's the gadget that enabled time travel in the movies).

If you're attending a costume party this weekend with a significant other (or a baby), then you'll want to wear coordinating outfits. Luckily, there's a space-themed costume that's perfect for the occasion: Pluto the dwarf planet and the space probe New Horizons.

For the sake of accuracy, the larger person in the duo should be Pluto. To make the costume, just cut two large circles out of a piece of cardboard and color them to look like Pluto. Create straps using two pieces of ribbon and a stapler, and you'll be ready to go.

For the space probe, you'll need something that looks like a satellite dish (perhaps one of those cones from the veterinarian's office or a Styrofoam bowl). You can construct the metal frame inside the dish using silver-painted chopsticks or pencils. You'll also need to create a "solar panel" out of cardboard to attach to one of your arms. Wear yellow or wrap yourself in gold-tinted foil to complete the look, and then cozy on up to Pluto.

El Niño: It isn't just the warm phase of the El Niño Southern Oscillation, a periodic climate cycle caused by variation in sea surface temperatures in the eastern Pacific Ocean. It's also the perfect costume for an outdoor Halloween party.

Transforming yourself into El Niño is easy because the effects of this warm-water phenomenon vary so greatly. In some places, El Niño is associated with warming sea surface temperatures (you could wear a bikini!), but it's also associated with increased sea ice in certain places (put on your full-body wet suit!).

One of the most widely known effects of El Niño is increased rainfall in some areas of the globe. If you relate to this, try carrying some water bottles around with you, and squirt them at your fellow partygoers. Everyone will love it, unless they hate it — in which case, put the water bottles down and dry people off with a towel. (El Niño is also associated with drier-than-average weather in certain areas of the world.)

If you want to be a superhero and a science geek at the same time this Halloween, then the "Iron (Fe) Man" costume is perfect for you. To assemble your costume, find two large pieces of cardboard (one for your front side and one for your backside). Draw a large "Fe" (the atomic symbol for iron on the Periodic Table of Elements) on each piece of cardboard, and strap them onto your body to complete the look.

If no one understands your costume, it may be time to find nerdier friends.

If the thought of being dark matter for Halloween sounds gloomy, then a constellation might be a better costume choice for you. To make this costume, assemble an all-black outfit and buy a package of large, plastic, glow-in-the-dark stars. Lay your black clothes down on a bed, and stick the stars to the clothes in the shape of your favorite constellation.

Orion, Cassiopeia, the Little Dipper — it doesn't really matter which one you choose; you're sure to be the star of the show.

You could be a skeleton this Halloween, or you could be something so much better — a Skeletorus. If you're not familiar with this tiny arachnid, which was first discovered in Australia earlier this year, then do some quick reading before making your costume.

To create the spider costume, you can either purchase a skeleton shirt or make one yourself (Fiskars has good tutorials on how to make your own using a black T-shirt, a white T-shirt and some wax paper). Then, you'll need to make four spider legs (your two arms and two legs will serve as the other four legs) by stuffing black tube socks or stockings filled with crumpled-up newspaper and sewing or stapling them to the sides of your shirt.

To complete the look, you'll need oversize eyes — so get out your most fashionable sunglasses, and then go party.