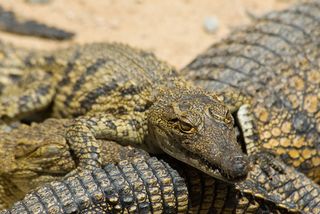 Have you heard the expression "better sleep with one eye open?" Crocodiles may take that phrase literally, according to a new study. To stay abreast of potential threats in their environment, crocs sometimes keep an eye open while snoozing, scientists found.

Lots of animals close only one eye while sleeping, including birds and some aquatic mammals, said John Lesku, a research fellow at La Trobe University in Australia and one of the authors of the new study. But not much research has been conducted on the one-eyed naps of crocodiles, which are more closely related to birds than they are to other reptiles, according to the study researchers.

By taking a look at how often crocs hang out with one eye open, Lesku and his colleagues hoped to shed some light on the mystery of when this behavior may have evolved, and whether it's actually unusual. After all, it could be that the tendency of humans and other terrestrial mammals to shut both eyes while sleeping is what's strange, Lesku said. [Sleep Tight! Snoozing Animals Gallery]

Though UEC is helpful for watching out for predators, some animals also engage in this behavior to keep an eye on their own kind. Aquatic mammals, such as bottlenose dolphinsand killer whales, often use UEC to track one another in the water, according to Lesku, who said there are a few theories about why they do this.

"It is thought that [UEC] reflects a way of maintaining group cohesiveness in a highly social animal. It could also be that, in a fairly boring aquarium, they simply keep their open eye on the most interesting thing – each other," Lesku told Live Science in an email. He added that researchers need to carry out more observations of these animals in their native habitats to find out if either of these explanations is correct.

But regardless of why aquatic animals sleep with one eye open, it's clear that all animals that engage in this behavior do so to monitor their environment in some way, Lesku said. And crocodiles are no exception.

Crocs on the clock

For the study, the researchers observed the "eye states" of juvenile saltwater crocodiles (Crocodylus porosus) that were kept in an enclosure. To establish a baseline for comparison, the researchers measured the time the animals spent with both eyes open, both eyes closed and with just one eye open, in 24-hour increments.

They found that, under normal circumstances, crocs don't stare at the world through just one eye very often (about 1 hour each day). And most of the time, crocodiles keep both eyes closed(about 17 hours total each day).

"It certainly seems to me that the animals preferred to either have both eyes open or both eyes closed," Lesku said.

However, when presented with "an interesting visual stimulus," crocs were more likely to open one eye than they were when there wasn't anything to look at, the researchers found. For instance, when another crocodile was placed in a tank adjacent to the tank of the croc under observation (but separated by a glass partition), the croc under observation was slightly more likely to open one eye than it was to keep both eyes closed. And crocs that did open one eye were very likely to direct their gaze at the other crocodile in the room, the scientists said. [Alligators vs. Crocodiles: Photos Reveal Who's Who]

These eye-popping results were more pronounced when the researchers introduced another visual stimulus on the other side of the partition — a human. When a human stood opposite a crocodile, the croc was very likely to open one eye and peer at the intruder, the researchers found.

"The crocodiles focused their gaze towards the human, and, indeed, continued to watch the location [where] the human had been even after he left the room," Lesku said.

While crocs were more likely to open one eye when presented with visual stimuli, it isn't yet known if the crocs were actually asleep with one eye open. To find out if a croc's UEC is a direct result of unihemispheric sleep, researchers will have to measure the animals' brain waves, Lesku said.

"The gold-standard for identifying sleep in mammals and birds is by looking at brain waves for specific patterns that indicate a sleeping or waking animal," Lesku said. "In our study we focused only on eye state. Whether two closed eyes always means that the animal is asleep, and two open eyes for an awake animal is yet unknown."

But if crocs are really engaging in unihemispheric sleep, then this behavior could help researchers get to the bottom of how the practice evolved in the first place. If the crocs are sleeping with one eye open, then this practice "likely evolved in the earliest reptiles and was retained by their descendants," according to Lesku.

"If true, then bihemispherically sleeping terrestrial mammals, including ourselves, may be quite unusual in the way we sleep," Lesku said.