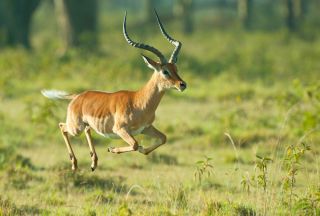 Impalas are medium-sized antelopes that look like a mix between a goat and a deer. They have long legs and necks and black, twisted horns. As members of the Bovidae family, they are related to goats, cattle and sheep.

The impala is native to Africa, and ranges from Angola, Namibia to northeast South Africa and north through Botswana, Zimbabwe, Mozambique, Zambia, Tanzania and Kenya. It lives in woodlands with little undergrowth and low to medium high grassland, according to the University of Michigan's Animal Diversity Web (ADW). They also live in savannas.

Groups of young impalas are called creches. These groups of offspring are like nursery schools for the young and they play together and groom each other, according to ADW.

Impalas are herbivores, which means they only eat vegetation. Their diets consist of bark, leaves, wood, and stems.

Before giving birth, a female will leave the herd. After a gestation period of six to seven months, she will give birth, usually to only one offspring at a time. Baby impalas are called calves. After a day or two, the mother impala will bring her calf back to the herd.

Calves are weaned at four to seven months, and at 12 to 18 months, the calf is mature enough to have its own offspring. Impalas usually live to around 13 years in the wild.

Here is the taxonomy of impalas, according to the Integrated Taxonomic Information System (ITIS):

Impalas are fantastic jumpers. They can leap as far as 33 feet (10 meters) and as high as 10 feet (3 meters), according to National Geographic. If impalas are running from predators, they are known to jump over obstacles in their way, such as large bushes or stumps, instead of going around them.

Impalas have reddish brown hair with white fur on the underside of the chin, inside ears, on the belly and lips, over the eyes and on the tail.

They also have black stripes down the forehead, tail, thighs and ear tips. Some scientists think they use these black stripes to identify each other according to the University of Michigan.