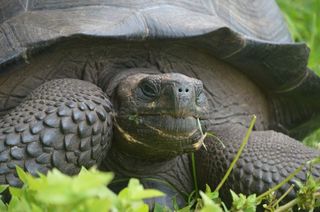 Paging Charles Darwin: The island of Santa Cruz within the Galápagos has not one but two distinct species of giant tortoise, a new genetic study finds.

For years, researchers thought that the giant tortoises living on the western and eastern sides of Santa Cruz belonged to the same species. But the tortoises look slightly different, and so recently, scientists ran genetic tests on about 100 tortoises from both groups.

The tests were definitive: The two tortoise populations, which live only about 6 miles (10 kilometers) apart on the opposite sides of the island, are actually extremely distant relatives. [Image Gallery: Fossilized Turtles Caught in the Act]

"We immediately found that [the eastern tortoises] were very distinct from the other ones," said the study's senior author, Adalgisa Caccone, a senior ecology and evolutionary biology research scientist at Yale University. "As distinct as species from different islands."

The finding may change how scientists approach the conservation of tortoises in the Galápagos, Caccone told Live Science. Right now, the western Santa Cruz tortoise population is booming, with about 2,000 members, whereas the eastern species has only about 250 individuals, Caccone said. Now that researchers know the eastern group is a separate species, it may receive increased habitat protection, she said.

The  discovery of the new species "will help these tortoises receive the scientific and management attention they need to fully recover," James Gibbs, a co-author of the study and a conservation biologist at the SUNY College of Environmental Science and Forestry in Syracuse, said in a statement.

"His dedication to his work has been inspirational," Gibbs said.

The populations of giant tortoises in the Galápagos have dropped to historic lows, largely because of human exploitation, invasive species and habitat degradation, the researchers said.

The findings were published online today (Oct. 21) in the journal PLOS ONE.