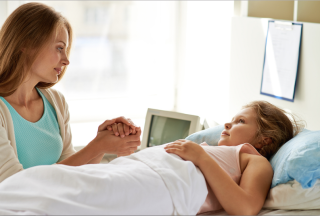 Doctors are worried about the recent approval of OxyContin for use in children as young as age 11.

The drug, which is a powerful painkiller, has been linked to the rise in heroin addiction and drug overdose deaths. The U.S. Food and Drug Administration (FDA) approved its use in children in August.

Although OxyContin was prescribed to children and adolescents prior to its approval in a practice known as "off-label use," it is likely to be prescribed much more widely now that it is officially approved, doctors say. [5 Surprising Facts About Pain]

Treating chronic pain, especially in children, can be incredibly challenging for doctors. There's no single, effective approach that makes pain go away for everyone, and for some patients, none of the existing drugs seem to work completely. In addition, some drugs commonly prescribed for people with chronic pain have the potential for addiction.

But even doctors with limited options for treating pain aren't happy with the decision.

"There really aren't many people that are applauding this decision," said Dr. Andrew Kolodny, a psychiatrist in New York City and the director of Physicians for Responsible Opioid Prescribing.

The majority of kids who will wind up getting OxyContin as a result of this decision will not be the appropriate patients, Kolodny told Live Science. Prior to the approval, OxyContin was already under fire for being overprescribed in adults.

In the past, doctors took a very biomedical approach to pain, said Dr. Tracy Harrison, a pediatric anesthesiologist and the medical director of the Pediatric Pain Rehabilitation Program at the Mayo Clinic in Minnesota.

The idea was that pain could be addressed by figuring out the right medication, and the right dose, for each patient, Harrison told Live Science. But pain — particularly chronic pain — is much more complex than that.

Simply using a medication, an injection, or in more extreme cases, surgery, in isolation doesn't address all of the other parts of patients' lives that can influence their pain, Harrison said. Sleep, anxiety, stress and activity levels can all play a role in both acute and chronic pain, she said.

In children and teens in particular, there's a significant psychosocial behavioral component, in addition to the physical aspect of pain, said Dr. Giovanni Cucchiaro, an anesthesiologist and the medical director for the Pain Management and Palliative Care Program at Children's Hospital Los Angeles.

If doctors look at the physical, psychological and social components of pain together, then most of the time they can manage chronic pain, Cucchiaro told Live Science.

There is no one single intervention that's always successful, he added. The best treatment comes from a combination of approaches that are individualized to each person, Cucchiaro said.

But not all patients — or doctors — have come around to this way of thinking.

A lot of patients, when offered counseling or breathing exercises, assume that doctors think their pain isn't real, Harrison said. "I have to tell them I know that the pain is real," she said.

Doctors often need to sit with patients for hours to explain the approach, she said. Indeed, it's far easier to just write a prescription, Harrison added. And sometimes patients or their parents may think that doctors are holding out on the medicine that will make the pain completely go away, she said. Unfortunately there is not one medication that can do that with consistency and the focus should be on maintaining function, even if some pain remains, she said.

One of those medications that people think can make pain disappear is OxyContin.

While doctors agree that there are cases in which OxyContin is appropriate for use in children, many physicians believe those cases are few and far between. For example, doctors are not disputing the use of OxyContin for children who have severe pain or are nearing the end of their lives, such as children who have cancer or have undergone very serious surgeries.

"The fact is there are going to be times when you need to expose children to an opioid, and there are times when it should be OxyContin," Kolodny said.

But Kolodny asserted that the use of the drug should be limited to end-of-life care. "Outside of palliative care, there's a very limited role," he said.

Cucchiaro agreed. "It's very hard to say, 'I'm going to start a kid on OxyContin,'" he said.

The role for this drug might include treating children who have undergone major surgery, or had a traumatic accident, he said. But even for those kids, very few pediatric pain doctors would prescribe OxyContin long term, because "we know the problems with tolerance and dependence," he said.

Cucchiaro noted that if doctors do prescribe an opioid for a child, they're more likely to prescribe a short-acting drug, such as Percocet. (Percocet and OxyContin contain the same opioid ingredient, oxycodone, but unlike Percocet, OxyContin is extended-release, meaning its effects last much longer.)

The use of the drug for chronic pain in children is especially concerning, she said. Many of her patients who have taken opioids were not able to function as normal teenagers do. The effects can be "debilitating" for some patients, she said. Instead of going to school and seeing their friends, they're staying in bed, she said.

Perhaps the biggest concern with OxyContin, and opioid painkillers in general, is the risk of addiction.

After a week on these drugs, the body becomes physically dependent on them, Kolodny said. And along with dependence, patients develop a tolerance, so they need higher and higher doses to achieve the same effect, he said.

Although it's hard to say how often children who take OxyContin will develop an addiction, the brain of an adolescent is more susceptible to becoming addicted to drugs, Kolodny said.

The brain does not fully mature until age 25, and there is good evidence that people who begin using drugs before that age are more likely to develop an addiction, he said. [10 Facts Every Parent Should Know About Their Teen's Brain]

One reason the FDA approval has made doctors uncomfortable is that they fear patients will think that doctors support the drug's use in children with chronic pain, Harrison said.

"It sends mixed messages to the public," she said. And patients may ask for the drug more directly, she said.

"The fact that OxyContin didn't have the indication for the use in children didn't stop doctors," he said. But now that OxyContin is approved — while other painkillers still aren’t — people will be more likely to want to use OxyContin, Kolodny said.

Especially with the recent attention given to the United States' opioid-addiction epidemic, it seems puzzling to some that the FDA approved OxyContin for adolescent use.

"The main concern I have about the FDA's decision is that they bypassed the advisory committee," Kolodny said. According to the agency's website, the FDA brings in an independent scientific advisory committee of experts when an approval decision may be of significant public interest or controversial, or may require special expertise.

"I very strongly believe that had they brought it before a scientific advisory committee" that included addiction specialists and neurobiologists, it would not have been approved, Kolodny told Live Science.

"To avoid an inefficient use of resources, we take pediatric applications to an advisory committee only when scientific issues arise that require the input of a committee. Pediatric studies are discussed by the FDA extensively prior to initiation by sponsors," Pahon told Live Science in an email.