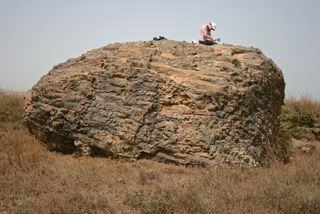 A researcher chisels out a rock sample for dating. Scientists have found evidence that a tsunami triggered by a volcanic collapse swept huge boulders like this one into the highlands of the island of Santiago.
(Image: © Ricardo Ramalho)

A mega tsunami taller than a 50-story skyscraper once engulfed an island off the west coast of Africa, researchers say.

This finding suggests the giant landslides and killer waves that such tsunamis can trigger might pose a major hazard to people living on islands and coasts, scientists added.

Not all tsunamis are caused by earthquakes. Some of these giant waves are caused by landslides, for instance, those occurring in submarine canyons or on the flanks of volcanoes. For example, in 1792, part of Japan's Mount Unzen collapsed, resulting in waves as high as 300 feet (90 meters) that killed about 15,000 people. In 1958, an earthquake sent a landslide into Alaska's isolated Lituya Bay, generating a titanic wave 1,724 feet high (525 m), the largest ever recorded. Two fishermen who happened to be in their boat that day were carried over a nearby forest. Miraculously, they survived. [10 Tsunamis That Changed History]

However, scientists were uncertain how much damage tsunamis that are triggered by volcanic collapses might cause in the open seas. All the giant waves triggered by volcanic collapses in the past few hundred years occurred in confined spaces that concentrate the energy of such collapses into smaller volumes of water. In contrast, in the open ocean, previous research suggested that waves generated by landslides generally lose energy quickly.

Now scientists have found evidence that a sudden volcano collapse triggered a giant tsunami dwarfing anything in recorded history that traveled dozens of miles.

"These finds provide another line of evidence that volcanic flank collapses really can happen suddenly and catastrophically and trigger giant tsunamis, and so we should not underestimate the hazard potential of these events — that is, the threat they pose to our society," study lead author Ricardo Ramalho, a geologist at University of Bristol in England, told Live Science.

The researchers focused on Santiago, the largest of the Cape Verde Islands off the west coast of Africa. Santiago, which is home to about 250,000 people, lies about 34 miles (55 kilometers) from Fogo, one of the world's largest and most active island volcanoes.

Currently, Fogo stands about 9,300 feet (2,830 m) above sea level. It erupts about once every 20 years, most recently last fall, when its lava flows displaced approximately 1,200 people and destroyed several buildings, including a new volcano visitors' center.

Ramalho and his colleagues were conducting research on Santiago when they discovered unusual boulders lying as far as 2,000 feet (610 m) inland and nearly 650 feet (200 m) above sea level. Some boulders were up to roughly 25 feet (8 m) wide and weighed up to 770 tons (700 metric tons). [See Photos of the World's Weirdest Balancing Rocks]

These giant rocks differ completely from the volcanic terrain on which they lie. Instead, they match limestone and other rocks that ring the island's shoreline.

"At first, we were quite puzzled by what we found in the field — why were such large boulders stranded on the landscape?" Ramalho said. "We got really excited when we realized that the only way to explain the origin of those boulders was with a massive tsunami impact."

Computer models helped the researchers calculate the size of the wave that must have hurled these giant rocks onto Santiago.

"We estimate that the wave was possibly about 170 m (557 feet) high upon arrival to Santiago's coastline," Ramalho said.

In comparison, the largest known recent tsunamis, which devastated the Indian Ocean's coasts in 2004 and eastern Japan in 2011, reached only about 100 feet (30 m) in height. "When you realize the implications of finds like these, you naturally feel humbled by the power of nature," Ramalho said.

To date when this mega tsunami happened, Ramalho and his colleagues analyzed isotopes of helium embedded in the boulders. (Isotopes are atoms of an element with varying numbers of neutrons.) The isotopes that are present in a boulder change depending on how long the rock has been lying out in the open, exposed to cosmic rays from outer space. Their findings suggest this event happened about 73,000 years ago, when a landslide on Fogo may have sent up to 38 cubic miles (160 cubic kilometers) of rock crashing into the ocean.

Other scientists have claimed that Spain's La Palma Island could generate mega tsunamis as well. Tsunami researcher Simon Day at University College London and his colleagues have controversially suggested that if La Palma's active Cumbre Vieja volcano erupted, a landslide on its western flank might trigger a wave about 2,950 feet (900 m) high. They argued this mega tsunami would devastate nearby islands, and still be about 330 feet (100 m) high when it hit the western coast of Africa and about 165 feet (50 m) high when it struck Florida and the Caribbean.

"I would say that if there was a large-enough catastrophic landslide, tsunamis with an initial magnitude of 3,000 feet (915 m) would be possible," Ramalho said. "But I don't know the geology of La Palma, and so I cannot comment on the validity of Simon Day's assumptions."

Prior research had raised doubts over whether large volcanoes were capable of suddenly dropping as much rock into the ocean as these new findings suggest. "Our finds imply that flank collapses can indeed happen catastrophically and generate giant tsunamis," Ramalho said.

However, Ramalho emphasized that volcanic collapses do not always happen catastrophically and do not always generate mega tsunamis.

"Our work shows that we need to be vigilant and that we should not underestimate the threat posed by flank collapses and the tsunamis they trigger, but our work doesn't imply that a flank [collapse] is about to happen on Fogo or anywhere else," Ramalho said. "Each volcano needs to be monitored and analyzed separately and in detail."

Ramalho and his colleagues plan to investigate whether Fogo or other volcanoes might collapse and trigger giant tsunamis in the future. "There is a growing awareness that extreme geohazards such as these will eventually, one day happen, so we might as well coolly and realistically see what can be done to mitigate their effects," Ramalho said.

The scientists detailed their findings online Oct. 2 in the journal Science Advances.

Editor's Note: The headline of this story was updated to reflect the height of the waves, which reached 50-stories high, not 50 feet as had been stated.