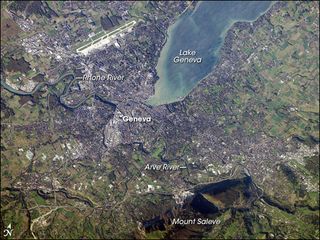 This astronaut photograph shows the city of Geneva, Switzerland, and the southern end of Lake Geneva. The photo was taken in November 2006.
(Image: © NASA.)

An ancient tsunami in a Swiss lake triggered by an Alpine landslide suggests that cities now on the lake's shore may face dangers more commonly associated with large oceans, researchers say.

Tsunamis are monster waves reaching more than 100 feet (30 meters) high. Earthquakes often generate them, but landslides can as well — for instance, those occurring in submarine canyons. So, landlocked tsunamis are possible, if lakes get hit by landslides or collapses of the flanks of volcanoes.

"People think that, to be affected by a tsunami, you have to live on seacoasts and in a region not too far away from major seismic activity," said researcher Guy Simpson, a geologist at the University of Geneva. "We think we have a counterexample."

Scientists analyzed Lake Geneva in Switzerland. More than 1 million people live on the shores of this lake, with 200,000 of them in Geneva, the second-most populous city in Switzerland.

In 563 A.D., a rock fall took place in the mountains more than 45 miles (70 kilometers) from Geneva, according to two historical accounts — one from St. Gregory of Tours, the other from Marius, bishop of Avenches. The rock fall, known as the Tauredunum event after a nearby fort, brought down boulders near where the Rhone River enters Lake Geneva. The falling boulders destroyed several villages. [50 Amazing Facts About Earth]

The disaster then went on to generate a tsunami in Lake Geneva that drenched everything on the lake's shore, devastated villages, demolished the Geneva bridge and mills, and even crashed over the city walls of Geneva, killing several people inside.

To investigate these accounts, researchers surveyed the deepest part of Lake Geneva seismically. This revealed a giant deposit of sediment on the lakebed more than 6 miles (10 km) long and 3 miles (5 km) wide, encompassing a volume of at least 8.8 billion cubic feet (250 million cubic meters). This deposit is about 15 feet (5 m) deep on average, and is thickest near the Rhone delta, suggesting that this is where it originated.

Core samples of lake sediment revealed this giant deposit was created between 381 and 612 A.D., suggesting the Tauredunum event was responsible. The researchers say the rock fall's impact on soft sediments near the lakeshore caused part of the Rhone delta to collapse, triggering a tsunami.

The scientists calculate that a wave about 25 feet (8 m) high could have reached Geneva approximately 70 minutes after the rock fall, traveling at about 45 mph (70 kph).

"It moved very fast, faster than you can run," Simpson told OurAmazingPlanet.

Geneva is especially vulnerable to such a disaster because of both its low elevation compared to the current lake level and its location at the tip of the funnel-shaped lake, an arrangement that strongly amplifies the height of waves. If such a tsunami happened today, it would completely inundate large parts of the inner city of Geneva, researchers said.

"Geneva is also the furthest distance from where we think this event was triggered. For people living closer to it, the arrival time of the tsunami could've been 10 or 15 minutes, giving almost no chance for a warning," Simpson said.

Given that river sediment is still building up on the slopes of the Rhone delta, the investigators said tsunamis may well occur in Lake Geneva in the future, perhaps triggered by rock falls, earthquakes or even large storms.

"Tsunamis have happened in Lake Geneva in the past, and in all likelihood, will probably happen at some stage in the future," Simpson said.

Future researchers can drill deeper into Lake Geneva's sediments to see how many other times such tsunamis might have occurred, and to get a picture of how often they happen and when another might strike.

Simpson and his colleagues Katrina Kremer and Stéphanie Girardclos detailed their findings online Oct. 28 in the journal Nature Geoscience.