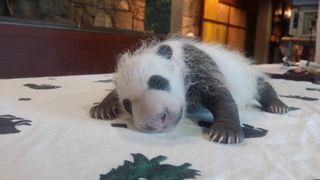 First ladies Michelle Obama and Peng Liyuan (of the People's Republic of China) revealed Bei Bei's name with the help of third-graders from the Washington Yu Ying Public Charter School, who helped unfurl the scrolls bearing the panda's name in Mandarin and English.

The name Bei Bei has the same meaning as Bao Bao, the cub's big sister, who just turned 2 years old in August. The two first ladies also collaborated for Bao Bao's naming ceremony when it was held in 2013, with Obama and Peng sending video messages to mark the occasion.

When Bei Bei turns 4 years old, he will leave his home at the National Zoo to live in China. But zookeepers from both places — the National Zoo and the China Conservation and Research Center for the Giant Panda in Wolong — offered ideas for the panda's name. [See Photos of Bei Bei Growing Up]

Panda keepers at the National Zoo suggested the name Ping Ping, which means "peaceful and calm." But the staff at Wolong prevailed with Bei Bei, according to a news release from the Smithsonian.

Typically, giant panda cubs (Ailuropoda melanoleuca) in the United States are named after they turn 100 days old. This tradition dates back to the 1970s, when the United States received its first two pandas from China, and decided to honor the Chinese tradition of naming newborns after 100 days.

But these days (and, in fact, for the past few centuries), Chinese parents no longer wait 100 days to name their children, though they typically have a celebration when the baby turns 100 days old, the zoo said.

Panda keepers in China also don't wait to name giant-panda cubs, and the National Zoo decided to nix the practice after it learned that the Chinese president Xi Jinping would be visiting Washington, D.C., and that his wife could take part in the naming ceremony.

The celebrations kicked off this morning, when Obama and Peng arrived at the zoo and saw the panda cub get a brief health checkup inside the panda house.

"Species conservation is at the heart of our mission at the National Zoo,” Skorton said, according to the news release. "We are honored to have First Lady Michelle Obama and First Lady Peng Liyuan join us to celebrate the more-than-four-decade history of China and the Smithsonian working together to preserve giant pandas, and to name the newest addition to our panda family."

Bei Bei won't go on public display until early 2016, but the students got to see his father, Tian Tian (tee-YEN tee-YEN) and sister Bao Bao in their outdoor yards, celebrating the naming ceremony with panda-friendly frozen cakes.

Meanwhile, veterinarians report that Bei Bei now weighs 2.95 lbs. (1.3 kilograms) and can lift himself up on his front legs and scoot around his mother's den when she sets him down.

Pandas are born deaf and blind, but Bei Bei can now hear, they added. Keepers noticed the little bear react when a door opened on Sept. 19. His eyes will likely open in a few weeks, they said.

His fraternal twin brother, also born Aug. 22, did not live long enough to be named. He died on Aug. 26, likely from aspiration pneumonia, the zoo said.

Panda enthusiasts can see Bei Bei and his mother Mei Xiang (may-SHONG) around the clock on the Smithsonian's Giant Panda Cam, and follow him on Twitter with the hashtag #PandaStory.