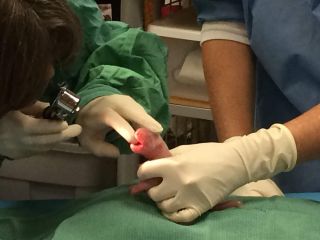 Twin pandas born at the Smithsonian's National Zoo would have been fraternal brothers, if the firstborn cub hadn't died just five days after making its debut on Earth.

The twins were born just about 5 hours apart from one another on Saturday (Aug. 22) at the Smithsonian's National Zoo in Washington, D.C. The sex of newborn pandas is difficult to determine, so researchers got DNA samples by taking a swab of each cub's cheek cells during a health checkup on Aug. 24, the zoo said in a statement.

Tests on the pandas' DNA showed that both cubs were male, according to researchers at the Smithsonian Conservation Biology Institute's (SCBI) Center for Conservation and Evolutionary Genetics. Researchers and veterinarians at the SCBI developed the test, which involves sequencing a short fragment of a gene for a zinc-finger protein, a protein in which zinc plays a structural role, the zoo reported. [See Photos of the Fraternal Twin Panda Cubs]

Paternity tests were needed because researchers used semen samples from two male pandas to artificially inseminate Mei Xiang (may-SHONG), a female panda living at the National Zoo. In April, researchers in China sent a sample of frozen sperm from Hui Hui (h-WEI h-WEI), a panda deemed to be a good genetic match for Mei Xiang. However, to increase the chances of a successful pregnancy, researchers mixed Hui Hui's samples with fresh ones from Tian Tian, who also lives at the National Zoo.

The researchers compared the cubs' genetic profiles to those of Mei Xiang, Tian Tian and Hui Hui, and found that Tian Tian was the best match, the zoo said. The 18-year-old father also sired Mei Xiang's other surviving offspring, including Tai Shan, who now lives in China, and Bao Bao, who just turned 2 years old and lives at the National Zoo.

Almost all giant pandas (Ailuropoda melanoleuca) belong to China, which loans them to zoos in the United States and other countries.

"What we have learned will greatly add to our body of knowledge about artificial inseminations in pandas," Rob Fleischer, head of the Center for Conservation and Evolutionary Genetics, said in a statement. "Determining the pedigree relationships of a cub is a key aspect of helping to maintain a genetically diverse population. Our ability to assess the cub's lineage will help our colleagues ensure that he finds a suitable mate."

The male cub will be named when it is 100 days old, the zoo said.

Death in the family

The zoo reported a difficult loss this week after the smaller of the twins died on Wednesday afternoon (Aug. 26), likely due to pneumonia, the zoo reported.

Mama pandas often struggle to care for twins, so zookeepers stepped in after Mei Xiang delivered both cubs. The officials placed one twin in an incubator and left one with Mom, swapping the cubs every 3 to 4 hours, or whenever Mei Xiang cooperated. But she wasn't always interested in switching cubs, the zoo reported earlier this week. [Baby Panda Pics: See a Cub Growing Up]

As a result, the smaller cub spent more time in the incubator, the zoo reported. This cub quickly lost weight, so the panda team fed it formula — made of water mixed with human and puppy formula — with a handheld bottle or tube. However, the little panda regurgitated some food during one feeding. As a precaution, the team started the cub on antibiotics, the zoo said.

The day before its death, the little panda stayed with Mei Xiang from about 2 p.m. on Aug. 25 until the morning of Aug. 26, when the panda team swapped the cubs again. At that time, the cub had not gained weight, appeared weaker and showed signs of possible respiratory problems.

The cub died at 2:05 p.m. EDT. Based on preliminary findings, zoo pathologists and veterinarians said the cub likely died from complications associated with breathing food into the respiratory system, which led to pneumonia. A detailed necropsy, or autopsy on an animal, will be available in four to six weeks and will likely provide more answers, the zoo said.

The National Zoo's panda habitat has been closed to the public since Aug. 20, and will remain closed so that Mei Xiang and her surviving cub can have peace and quiet. But panda fans can view the animals remotely from the zoo's panda cams. Visitors can also see Tian Tian and Bao Bao eating bamboo in the outdoor habitat.