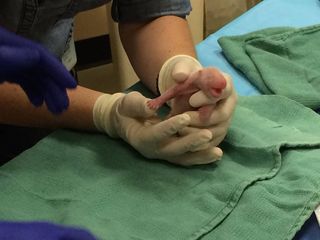 The cub showed no signs of decline until this morning, after spending the night with its mother, Mei Xiang (may-SHONG), while its twin stayed in an incubator, said Dr. Donald Neiffer, the chief veterinarian of the National Zoo. This arrangement was set up to help Mei Xiang care for the twins. Zookeepers kept one twin with her at all times and the other in an incubator. They swapped the twins every three to four hours, or whenever Mei Xiang cooperated.

"However, this morning, when our team went in to perform the swap again, we immediately noted that the little cub had not increased in weight, appeared weaker and was exhibiting possible respiratory issues," Neiffer said. [See Photos of Mei Xiang's New Twin Panda Cubs]

The panda team immediately gave the cub antibiotics, fluids and respiratory and nutritional support, Neiffer said. They saw some slight improvement, but the cub's health deteriorated into the early afternoon, and it died at 2:05 p.m. EDT, he said.

The cub's twin, the larger of the two, is still alive and with its mother.

"It's very robust and very strong, and is demonstrating all normal behaviors," Neiffer said. "We're all extremely happy with this [surviving] cub's progress."

The 17-year-old Mei Xiang has given birth to six pandas, and the little cub is the third to die (one was a stillborn and the other died after six days from liver damage, likely because its lungs were underdeveloped). Her surviving offspring are Tai Shan (born in 2005), who now lives in China; Bao Bao (born in 2013), who lives at the National Zoo; and the living panda twin, which will be named after 100 days.

On Saturday (Aug. 22) Mei Xiang became restless and began having contractions, Laurie Thompson, a giant panda biologist at Smithsonian's National Zoo, told Live Science. The panda twins were born later that day, the first at 5:35 p.m. EDT and the second at 10:07 p.m., the zoo reported.

After delivering the second cub, Mei Xiang showed "some frantic behavior on her part, trying to literally balance and juggle these two kids at the same time," Neiffer said.

Pandas don't have a great track record of caring for twins by themselves, so following a protocol used by other zoos and panda experts in China, the National Zoo decided to move forward with swapping the panda twins between their mother and the incubator. When Mei Xiang had a cub, she would often nurse it and snuggle it in a warm part of her body, such as her armpit, to keep the cub warm, as newborn pandas can't regulate their own body temperature, Neiffer said.

Meanwhile, zookeepers and veterinarians would care for the other cub in the incubator, feeding it formula made of water, human baby formula and puppy formula, the zoo reported. [Cute Alert! Adorable Photos of Giant Panda Triplets]

However, Mei Xiang appeared to grow wary of the baby swaps. Zookeepers reported she didn't appear to show a preference for either cub, but she just didn't seem to like the swaps.

"During the swap-back times, there were days when she was a little less interested in taking that baby, but that occurred where either baby is concerned," Neiffer said.

Zookeepers performed a successful swap on Tuesday afternoon (Aug. 25), and both cubs "were vocalizing, were strong, and showing us no signs of concern," he said. Nothing seemed out of place during the nighttime, and the little panda's health problems only became apparent this morning.

It doesn't appear that Mei Xiang did anything out of character to the little twin during the night; but she's about 1,500 times larger than her offspring, so it's not always easy to see them on the panda cam, Neiffer said.

Researchers hope a necropsy will tell them more about the cub's death. Moving forward, the team will concentrate on caring for the surviving twin and its mother.

"Right now, we still have a healthy mom and one very healthy baby," said Brandie Smith, associate director for animal care sciences at Smithsonian's National Zoo. "Our job is to make sure that both mom and cub survive."