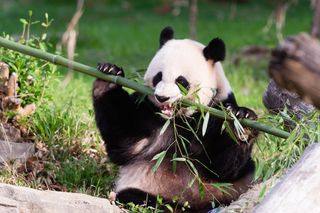 Giant panda Mei Xiang (may-SHONG) may have another cub in a few months. Veterinarians gave the furry 16-year-old starlet two rounds of artificial insemination on April 26 and 27 at the National Zoo in Washington D.C., according to the Smithsonian.

Female giant pandas are fertile only once a year for about 24 to 36 hours. So, to artificially do the deed, a team of experts carefully monitored Mei Xiang's hormone levels for weeks until they were sure she was in estrus (ovulating) and able to become pregnant, according to a Smithsonian news statement.

Mei Xiang has never met one of the two potential fathers — giant panda Hui Hui (h-WEI h-WEI), who lives in the China Conservation and Research Center for the Giant Panda in Sichuan, China. Researchers determined that Hui Hui would be a good genetic match for Mei Xiang, according Pierre Comizzoli, a research veterinarian with the Smithsonian Conservation Biology Institute (SCBI). [In Photos: Giant Panda Mei Xiang Gives Birth]

Roughly 90 percent of pandas in human care live in China, and zookeepers have detailed family trees of which pandas are related, Comizzoli said.

"By looking at the stud book, we knew that Hui Hui was a good candidate to breed with our female Mei Xiang," Comizzoli told Live Science. Hui Hui has yet to sire any cubs, and his genes may help preserve genetic diversity within pandas that live in captivity, he said.

But, during the two artificial insemination procedures, the researchers supplemented the frozen semen with fresh semen samples from Tian Tian (t-YEN t-YEN), a male giant panda at the National Zoo, "because we wanted to make sure that there would be a conception this year," Comizzoli said.

If the pregnancy is successful, a swab of DNA from the cub's saliva will determine who its father is, Comizzoli said.

During each hour-long artificial insemination, a veterinarian put Mei Xiang under general anesthesia for the nonsurgical procedure. But experts won't know whether she's pregnant for months, Comizzoli said.

Giant-panda pregnancies can last between three and six months, but it's impossible to tell whether the pregnancy is real from the female's behavior or hormone levels alone.

During a pseudopregnancy, female pandas have high hormone levels, build nests out of bamboo, eat and drink less, cradle objects and sleep more than usual, just as they would during a real pregnancy, Comizzoli said.

"It's really misleading because she does that no matter what," he said.

So, the team at the National Zoo and SCBI will give Mei Xiang several ultrasounds in the coming months to see whether they can spot a fetus. They'll also monitor her hormone levels near the end of a probable pseudopregnancy to see whether she is really pregnant.

Mei Xiang has already given birth to four panda cubs sired by Tian Tian. Two of the cubs survived, including Tai Shan (tie-SHON) and Bao Bao (BOW-BOW). The two other cubs did not make it, including one that died shortly after birth in 2012, likely because its lungs were underdeveloped, and a stillborn (Bao Bao's twin) in 2013, Comizzoli said.

Breeding giant pandas in captivity may help to save the species, especially now that China has started to reintroduce captive pandas into the wild, Comizzoli said.

By breeding unrelated pandas, "we can make sure we maintain a good genetic diversity," he said.