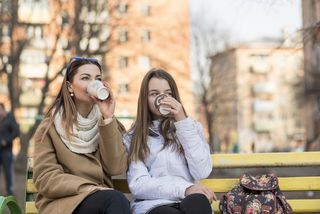 The idea that people eat breakfast, lunch and dinner (and maybe a snack or two) turns out to be a completely unrealistic notion of how people eat.

A new study that used a smartphone app to track every bite people ate finds that the average person is a grazer. People don't eat three or four times during the day; they snack all the time.

"[It's] not only that people don't eat three meals a day. They also eat very random items and random combinations of items," study researcher Satchidananda Panda, an obesity researcher at the Salk Institute's Regulatory Biology Laboratory in California, told Live Science. "For example, [a] cream-cheese-Cheeto sandwich [or] rice crispy with spicy trail mix. People are very creative." [9 Snack Foods: Healthy or Not?]

People also eat over a significant period of their waking hours. The average time between the first bite of breakfast and the last bite of dinner (or an evening snack, or drinks at the bar) was 14 hours and 45 minutes, Panda and his team report today (Sept. 24) in the journal Cell Metabolism.

This is promising news because it suggests an easy way to improve weight and health — people could limit their food consumption to a smaller window, Panda said. He and his team previously studied animal eating patterns. They found that lab animals that had access to food for only 8 to 12 hours each day were leaner and had healthier heart function, liver function and cholesterol levels than animals allowed to eat whenever they liked around the clock.

Other researchers had said that those findings probably didn't apply to humans, based on the idea that humans mainly eat three meals within a time period of less than 12 hours, Panda said. But "actually, there was not much collected in an evidence-driven way on free-living humans in free-living conditions" to support this idea, he said.

For people who are eating for nearly 15 hours daily, limiting eating to fewer hours in the day is potentially "a very simple intervention," Panda said.

An app for food

Most food-consumption studies rely on food-diary reports, but people don't necessarily record every morsel they consume in such diaries. Panda and his team wanted to know about every single french fry stolen from someone else's plate. So they developed a smartphone app (now available for anyone to download) that works a bit like the Snapchat of food.

The 156 people in the study were instructed to photograph everything they ate or drank before consuming it. The pictures were immediately sent to a central server to collect the data, but the photos were also automatically deleted from the users' phones, so they wouldn't have a visual record that might trigger them to change their eating habits.

The researchers worked to make their app "ridiculously simple" to use, and employed push notifications to remind people to keep snapping photos. Food reporting became second nature for the study participants, the researchers found. The scientists estimated that people forgot to snap photos of what they ate only 10 percent of the time.

The photos revealed no standard pattern of breakfast, lunch and dinner. Instead, people had "eating events" (anything from a snack to a full meal) that ranged in number from three to 10 daily, on average.

Less than 10 percent of people restricted their eating to a 12-hour window or less.

People also ate just a little too much, the researchers said. On average, the participants consumed 1,947 calories a day, about 23 percent more calories than the estimated average amount needed to maintain their weight.

Next, the researchers asked eight overweight but otherwise healthy participants to participate in a more experimental use of the app. These people were told to pick a 10 to 12-hour stretch of the day and restrict their entire caloric intake to just that stretch. They were also told to keep the stretch consistent seven days a week. (In the initial study, people often ate breakfast an hour or more later on weekends than they did on weekdays, and dinnertimes were far more erratic, potentially creating a sort of "metabolic jetlag.")

After 16 weeks of this, these participants lost an average of 7.2 pounds (3.27 kilograms) and reported they were sleeping better and had more energy. An analysis of their diets found that they'd reduced their calorie intake by about 20 percent.

One reason for this calorie cutting may have been that people tend to stick to certain consumption patterns, Panda said. The researchers found, unsurprisingly, that alcohol consumption peaks in the evening hours, whereas coffee and milk are beverages of the morning. (For the record, veggies are an evening food, but people get into the chocolate starting around 10 a.m.)

If people choose to limit their eating to a 10- to 12-hour window, the timing of that window might determine which foods they cut out, Panda said. For example, an earlier window might lead to drinking less alcohol.

But there may be more to the story than a straightforward link between weight loss and eating during a shorter time period. Eating close to bedtime may not be as healthy as cutting off food earlier in evening. During overnight fasting, the body burns through its easily accessible carbohydrate reserves first, and then turns to fat for energy, Panda said. And diet and circadian rhythm are tightly linked.

"The circadian clock can modulate metabolism, and food consumption can in turn influence the clock," said Nelson Chong, a senior lecturer in pharmacology at the University of Westminster in London who was not involved in the research.

"We have evolved to eat during the daytime," he said. "If you eat late at night, the genes that are there to properly process those fats and sugars are not [activated] at their optimal level." [5 Things You Must Know About Sleep]

Extrapolating the results from eight people to the 70 percent of American adults who are overweight or obese isn't possible, Panda warned. But the app is now available in an updated form for iPhone and Android users, and it now provides feedback on the user's diet. The researchers hope to expand the study to wider swathes of the population, Panda said, speaking from an obesity conference in Switzerland.

Researchers at the conference were also interested in replicating the study in Europe, India and Japan, he said.

"Lifestyle is a combination of what we do and when we do it," Panda said. "And when it comes to food, there has been a lot of research done to monitor what people eat, and there are also suggestions of what they should not eat. But when it comes to timing, we haven't figure out this aspect of lifestyle."