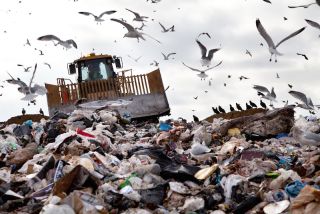 The United States is sending more than twice as much solid waste into its landfills as previously thought, a new study finds.

Researchers found that people threw away 289 million tons of municipal solid waste in 2012, a figure that is more than double the 135 million tons that the Environmental Protection Agency (EPA) calculated for that same year. The new estimate also exceeds by 4 percent the World Bank's predictions for the amount of waste the United States will generate in 2025, the researchers said.

The finding is problematic for climate change models, the researchers added. If there is more solid waste in landfills, the amount of greenhouse gases released by landfills is likely also higher than has been previously estimated, the researchers said. In particular, the scientists are concerned about the release of methane — a greenhouse gas emitted by landfills that traps heat in the atmosphere 25 times more effectively than does carbon dioxide, according to the EPA.

Reducing greenhouse gas emissions from landfills is crucial, and may be achieved by implementing more and better methods to capture methane before it reaches the atmosphere, the researchers said. [In Photos: World's Most Polluted Places]

The new estimate and the EPA's estimate are dramatically different because they rely on different datasets. The EPA traditionally bases its waste estimates on information from industry associations, businesses, the U.S. Census and the Department of Commerce — which all provide numbers on how much waste ends up in landfills.

In contrast, the new figure is based on actual weight measurements, said study lead author Jon Powell, a doctoral student of chemical and environmental engineering at Yale University.

In 2010, due to the U.S. Greenhouse Gas Reporting Rule that was passed the year before, large landfills began providing the weight of trash entering their premises. To do this, landfill operators usually weigh trucks before and after they dump waste into the landfill, taking the difference to determine the weight of the trash.

As with any new law, it took a while for industry to meet the requirements. The first complete dataset is from 2012, the year the researchers analyzed, Powell said. It includes data from more than 1,200 municipal solid waste landfills, of which about 900 are open, or actively accepting waste.

"Essentially, the data we reported is a summation of those landfills which are open," Powell told Live Science. "We did not do any estimates or extrapolations."

An analysis shows that closed landfills are 17 percent more effective at capturing greenhouse gases than open landfills are. This is no surprise, as open landfills often have huge mounds of exposed, decomposing waste. (Operators usually cover this waste with soil at the day's end, which can oxidize methane and reduce odor. But still, open landfills were responsible for 91 percent of landfill emissions in 2012.) Closed landfills are usually fully covered to prevent the gas from escaping. [Top 10 Surprising Results of Global Warming]

There are several ways to collect greenhouse gases before they are released into the atmosphere, the researchers said. One method is to place a geomembrane, a thin plastic cover, over the waste. This helps landfill operators capture and then destroy methane by combusting it into less potent carbon dioxide and water. Other landfills collect methane and use it as an energy source, much like other natural gases, Powell said.

"Improving the collection of landfill gas at open landfills must be a target for policy makers, researchers and practitioners to achieve near-term greenhouse gas emission reductions in the waste sector," the researchers wrote in the study.

The scientists also found that the average landfill has about 33 years left in capacity, but that overall waste is increasing by 0.3 percent a year, according to data collected from 2010 to 2013.

"I think the disposal rate and capacity numbers are interesting on their own, but I think in the bigger picture, it provides us a distinct, data-driven roadmap for where we can target emissions reductions in the waste sector," Powell said in a statement.

The country won't run out of landfill space anytime soon, but sometimes the landfills that have more space are far away from cities that need their services, said Morton Barlaz, a professor and head of the Department of Civil, Construction and Environmental Engineering at North Carolina State University, who was not involved with the study.

He added that "the method used to estimate waste quantity in the Yale study is more reliable than the method used by [the] EPA." However, the new study also has some approximations in its measurements, including the amount of ash from burned solid waste put into landfills, Barlaz said.

In an email to Live Science, the EPA said it was looking forward to reviewing this study. The EPA is currently calculating the country's greenhouse gas emissions for the Inventory to the United Nations Framework Convention on Climate Change. "As a part of this process, the EPA assesses studies such as these for new, high-quality data that could inform inventory updates," the agency said.