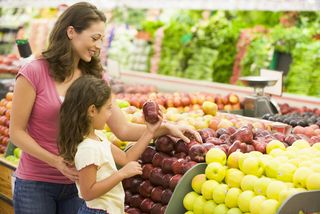 The award for most popular fruit among children goes to apples, a new study finds.

Apples accounted for nearly 20 percent of all fruit consumption among kids ages 2 to 19, followed by citrus juice and apple juice. Bananas were the second most popular whole fruit, accounting for 6.8 percent of kids' total fruit intake, according to the study.

The researchers also found that children and adolescents eat 1.25 cups (10.4 ounces) of fruit each day on average, and about half of that comes in the form of whole fruit. The U.S. Department of Agriculture recommends that children get 1 to 2 cups (8.3 to 17 oz) of fruit a day, depending on their age and sex.

The researchers found that whole fruit made up more than half of kids' fruit intake. Whole fruit is most often the healthiest form of the food, because it has no added sugar or fat, and contains fiber, the researchers wrote in their study, published today (Sept. 21) in the journal Pediatrics.

Juice was the second most common way that kids and adolescents got their fruit, the researchers found, with 100 percent fruit juices accounting for just over one-third of kids' fruit intake, according to the study.

Drinking juice is not necessarily a bad thing, said Katherine Tallmadge, a registered dietitian and op-ed contributor to Live Science, who was not involved in the study.

In fact, 100 percent fruit juice is "still really good for you," Tallmadge said. But it can be a problem if juice is children's only source of fruit, because then they aren't being exposed to real fruit, she said. Giving kids fruit at young ages can help them begin to love fruit, she said.

About half a cup of juice, or 4 ounces, each day is enough, she said. "The rest should be [whole] fruit."

Dried fruit such as raisins came in last among kids' choices, accounting for only 0.6 percent of kids' fruit intake, though it was more popular among 2- to 5-year olds.

"I'm surprised they're not eating more," Tallmadge said. Dried fruit, though more calorie-dense than whole fruit, lets kids get used to the natural sweetness of fruit, she said.

As for types of fruit, apples and citrus fruits accounted for nearly half of children's fruit intake, according to the study.

But "variety is crucial," said Tallmadge. Even if children prefer apples or oranges, they should be encouraged to eat a wider variety of fruits, she said.

Every fruit contains a specific combination of certain nutrients, and the more variety you eat, the more nutrients you get, Tallmadge said. And kids who are exposed to more fruits at a young age will be more likely to keep eating them as they get older, she said.

For kids who aren't getting enough fruit in their diet, Tallmadge said one of the most important things parents can do is make fruit more accessible. For example, instead of keeping whole apples around, slice them up and store them in the fridge, she said. Keeping fruit like this lets kids grab things the way they are.

A 2010 study from the Netherlands found that kids were more likely to eat fruit if it was presented in a fun way. Tallmadge recommends making fruit kabobs and yogurt parfaits for a kid-friendly presentation.

And the same advice goes for older kids and even adults, Talmadge said. Fruit should be easy, accessible, visible and ready to go, she said.