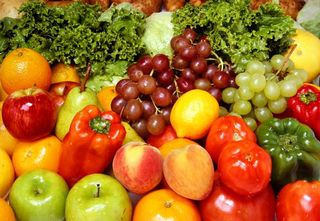 Here's a potential tip for getting kids to eat their fruit: Make it look flashy.

That's the conclusion of Dutch researchers who examined ways to boost fruit consumption in 94 children 4 to 7 years old. If the fruit was presented in a visually appealing way, kids ate almost twice as much of the juicy produce than if it was presented in a more run-of-the-mill manner.

In the study, "visually attractive" strawberries, grapes and apples were skewered with flagged cocktail sticks and stuck into a watermelon. The "regular" fruit was still skewered, but just laid out on a white plate.

In contrast, the study found no evidence to support the idea that prohibiting children from eating fruit makes them want to eat more of it (similar to the way sweets are made all the more tantalizing if your mother says you can't have any.)

The researchers don't know why the kids preferred to chow down on the more visually attractive fruit, since the children knew both presentations would taste the same.

"Perhaps, it was not about taste, but about fun," the researchers, from Maastricht University in the Netherlands, write in the current issue of the journal Appetite.

"Parents, schools, supermarkets and food producers should take advantage of these results and offer children fruit and vegetables that are presented in a visually appealing manner," they write.

The kids ate on average 4.8 ounces (135 grams) of the visually appealing fruit and about 2.6 ounces (73 grams) of the regular fruit.

Although the researchers also expected children in the other two groups to favor the fruit that was restricted during the first session, they saw no such effect. Future research will be needed to gauge the role of restriction in kids' eating behavior, the researcher say.

The authors admit they don't actually know whether the kids found the fruit sticking out of the watermelon more visually appealing or they were drawn to its unusual presentation.

They also don't know how a certain presentation of fruit will fare over the long term. After seeing the presentation multiple times, kids might start to lose interest.

"In the long term, it is probably necessary for parents and food producers to remain innovative," they suggest.

That innovation could help to boost kids' fruit consumption. Kids are recommended to eat about 1 to 2 cups of fruit a day, according to the U.S. Department of Agriculture. Currently, most Americans don't get enough fruit — only around 6 percent of adolescents aged 12 to 18 eat the recommended amount of fruit, according to a 2009 study by the CDC.