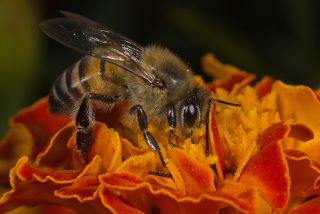 Bad news for apiphobes: "Killer" bees are on the move in the United States.

Scientists from the University of California, San Diego recently collected hundreds of bees around the Golden State to determine how far north hybrid honeybees, or Africanized bees, have spread since they first arrived in the state in 1994.

They found that Africanized bees — which possess genes from both European and African honeybees — now live as far north as California's delta region (about 25 miles, or 40 kilometers, south of Sacramento). And in the southern part of the state, so-called "killer" bees run the show. About 65 percent of the honeybeesthat buzz around San Diego County have a mix of European and African genes, the researchers found. [No Creepy Crawlies Here: Gallery of the Cutest Bugs]

"The pattern of Africanization we documented in San Diego County and elsewhere in California appears consistent with patterns previously documented in Texas, where Africanized honey bees first appeared in the United States," Joshua Kohn, a professor of biology at UC San Diego and co-author of the new study, said in a statement.

While Africanized bees have taken up residence throughout the American South, Southwest, Southeast and Western coastal regions, their ability to set up permanent colonies in the northern parts of the country seems to be limited by cold temperatures during the winter months, Kohn said. However, higher temperatures caused by global warming could mean that killer bees may continue to push north in the coming years, he added.

There are a few reasons why the range of Africanized bees in California and other states is important, Kohn told Live Science. For one, these bees are highly aggressive, he said. People in California, Arizona and Texas (as well as several other states) have been seriously injured or killedafter enduring thousands of stings from Africanized bees, which are quick to defend their hives. Knowing where those hives might be is a good starting point for preventing future attacks, Kohn said.

But scientists don't just want to track the migration of Africanized bees because of their killer instincts. Kohn and Yoshiaki Kono, a graduate student in UC San Diego's Department of Biological Sciences and lead author of the new bee study, are also curious about the spread of the Africanized bees' more desirable qualities, such as their resistance to some of the diseases and mites that are killing off honey bees in other parts of the country, Kohn said.

The flight of the honeybee

The story of killer bees started in the 1950s. In an effort to breed honeybees better suited to South America's tropical climate, a biologist in Brazil imported a subspecies of bee (Apis mellifera scutellata) from southern Africa to interbreed with bees from Europe. But winged insects are hard to contain, and several swarms of African bees escaped into the wild.

The runaway bees bred with local populations of European honeybees, and their hybrid descendants spread, mating with other European bees along the way. This intermingling of the African and European honeybees' gene pools is known as Africanization because it's the African genes that generally prevail, according to Kohn. The typical Africanized bee in California has a genome made up of 70 to 80 percent African genes and only 20 to 30 percent European genes, he added. [On the Hunt: Honeybee Scouts Find Food]

African genes, and the qualities they are associated with, are dominant because they are favored by natural selection, Kohn said. An Africanized bee's slightly larger size and high reproduction rate give it certain advantages over non-Africanized bees, for example.

Africanized bees also appear to be more resistant to certain diseases and parasites compared to European bees, Kohn said. In fact, there are many studies that back up this claim. One study, published in 2010 in the journal Experimental and Applied Acarology, found that Africanized bees may be more resistant to the parasitic mite Varroa destructor (an insidious foe inside bee colonies) because of the bees' grooming behaviors and the lowered fertility of the mites inside the brood, or honeycomb of the Africanized hive.

Right now, most of California's Africanized bees are feral — the study found that only 13 percent of managed hives in San Diego County carried the African mitotype (mitochondrial DNA), as opposed to 70 percent of feral hives in the county. Most beekeepers prefer European honeybees because Africanized bees are so much more difficult to manage, Kohn said.

But, there may be a way for beekeepers to get the disease resistance they're looking for in European bees while minimizing the risk that Africanized bees pose.

"By dissecting the genomes of Africanized honey bees to find regions responsible for advantageous traits, we may be able to combat recent declines in managed honey bee populations that are so critical for food production," Kohn said.

Disease-resistant bees that aren't likely to kill anyone could be a win-win for everyone.

The study on Africanized bees in California was published today (Sept. 11) in the journal PLOS ONE.