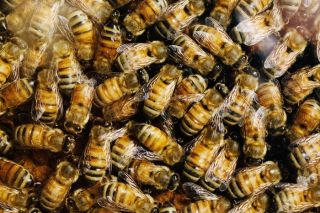 Another potentially significant answer in the long-running mystery behind colony collapse disorder (CCD) may have just emerged: Researchers have found a virus that typically infects plants has been systemically infecting honeybees in the United States and China.

Researchers have studied bee colonies for years in an effort to discover the root causes for the collapse of millions of bee colonies — an ongoing problem with significant downstream ripple effects for large-scale agriculture and food production efforts.

It is now common and routine for researchers to screen bees in colonies for rare viruses. But in the process of screening, researchers at a federal research facility may have stumbled across a potential answer to the long-running CCD mystery; the scientists found a viral pathogen that typically infects plants spreading inside the bees.

The detection of this virus (the Tobacco Ringspot Virus, or TRSV) could help explain the decline of honeybees and the collapse of colonies, researchers from the U.S. Department of Agriculture (USDA) Research Service and China's Academy of Agricultural Science said in a new study in the American Society for Microbiology's open-access journal, mBio.

"The serendipitous detection [of TRSV] prompted an investigation into whether this plant-infecting virus could also cause systemic infection in the bees," said Yan Ping Chen, a study author who works at ARS.

The study results "provide the first evidence that honeybees exposed to virus-contaminated pollen can also be infected and that the infection becomes widespread in their bodies," said Ji Lian Li, another study author who works at China's agricultural science academy in Beijing.

Researchers have known for some time that honeybees can transmit TRSV when they move from flower to flower during the pollination process. What wasn't known, until now, was the relationship of systemic "host-jumping" and whether such a virus could cause systemic infection in the honeybees.

But now, based on this latest study in mBio, researchers can start to explore the ways in which these deadly viral cocktails not only travel and migrate, but how they systemically infect the bodies of honeybees and lead to the collapse of hives.

Last summer, for instance, researchers from the University of Maryland and the USDA collected pollen from seven major types of crops along the East Coast where CCD has been especially destructive — where bees had been in serious decline — and fed them to healthy bees.

The pollen fed to the healthy bees contained an average of nine different types of pesticides and fungicides. The researchers discovered that the healthy bees that ate the fungicides — which are supposedly harmless to bees — were actually three times more likely to become infected with a parasite that's known to cause CCD. What the study indicated is that there may not be a single cause of CCD — it could be a complex web of many chemicals that involves different types and classes of pesticides and fungicides.

In the new mBio study, researchers explained that about 5 percent of known plant viruses like TRSV are transmitted by pollen and are, for this reason, prime suspects as potential sources of host-jumping species (jumping from one species, plants, to another species, honeybees).

The TRSV virus is an especially dangerous type of host-jumping virus because it lacks an internal genomic process that edits out errors in replicated genomes — meaning that TRSV can generate all sorts of variant, error-filled copies with lots of different infection characteristics that cannot be easily defended once they jump from plants to honeybees and spread throughout the hives.

More insidiously, as far as bees are concerned, is the way in which these error-filled virus copies become a sort of "cloud" of genetically-related variants that seemingly work in concert to determine the pathology of their hosts. That sort of genetic diversity, coupled with large population sizes, is quite literally a recipe for disaster when it jumps from plants to bees. Viruses such as TRSV, once they jump species, are "a likely source of emerging and re-emerging infectious diseases," the researchers said in their mBio study.

What is becoming clear, the U.S. and Chinese researchers said, is that such clouds of viral infections in colonies are likely responsible for the collapse of hives. Weak colonies — those with high levels of multiple viral infections — start failing in late fall and collapse by February, while colonies with fewer cloud-like viral assaults survived the winter.

"The increasing prevalence of TRSV in conjunction with other bee viruses is associated with a gradual decline of host populations and supports the view that viral infections have a significant negative impact on colony survival," the U.S. and Chinese researchers concluded.

Nesbit's most recent Op-Ed was "Will Grizzly-Polar Bear Hybrid Wake People Up to Changing Climate?." This Op-Ed was adapted from "Another Answer to Why the Bees Are Dying," which first appeared in Nesbit's column At the Edge in U.S. News & World Report. The views expressed are those of the author and do not necessarily reflect the views of the publisher. This version of the article was originally published on Live Science.