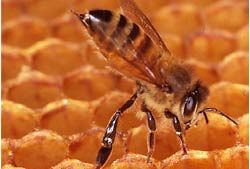 Even healthy bee colonies are constantly under attack from viruses, bacteria, fungi and other parasites. New research finds that these pathogen levels are constantly in flux in colonies, information that could help rule out the prime suspects in colony collapse disorder.

"We need to now what's normally there before you can figure out what's causing disease," said study researcher Michelle Flenniken, of the University of California at Davis. Most colonies were infected with two to three viruses and a small parasite called Nosema. "Every week there were different viruses associated with the colonies, waves of viruses passing through," Flenniken said.

Bees are responsible for pollinating about a third of food crops, but their populations have been dropping steeply in the last decade due to a mystery illness that destroys colonies, called colony collapse disorder.

The researchers watched 70,000 healthy bee hives (from more than 20 colonies) every week for more than 10 months, while the insects made their normal treks from crop to crop across the United States. During this time the bees were exposed to antimicrobial treatments, transportation stress, different food sources in three different geographical locations (Mississippi, South Dakota and California).

During the survey of the hives' "microbiome," they discovered four new viruses and a trypasnosome, a type of single-celled parasite, which had never been identified before. One new viruses, the Lake Sinai 2 virus, was found in very high concentrations, up to 1 hundred billion copies of the virus per bee in some hives. [10 Most Diabolical and Disgusting Parasites]

"The new viruses were really surprising, they were the biggest part of the honeybee microbiome," Flenniken told LiveScience.

Since these were healthy hives, researchers can rule out these pathogens as causes of colony collapse disorder, though a novel interaction between two different diseases could still be the cause. Recent research blames a virus-fungus tag team as a possible cause, though evidence is still lacking to support this hypothesis, the researchers of this study said.

Other viruses that had previously been associated with colony collapse, including Israeli bee paralysis virus, were found in the healthy colonies. Transporting the bees from location to location had no effect on their pathogen loads, either, ruling out another early theory about colony collapse disorder.

The researchers are currently studying the new viruses to find out if they make honey bees sick.

The study was published Tuesday (June 7) in the journal PLoS ONE.