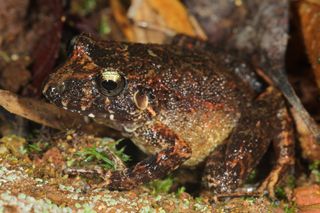 A "robber frog" with beady, gold-rimmed eyes and a bizarre bat with a record-long tongue are among the menagerie of species discovered during an expedition in Bolivia.

The slick, earth-hued robber frog, or big-headed frog, was spotted during the first leg of the 18-month-long expedition to explore Bolivia's Madidi National Park, considered the world's most biologically diverse park, according to the Wildlife Conservation Society. The frog, which could sit comfortably in the palm of a child's hand, is considered a new species, though further testing is needed to confirm that status.

"As soon as we saw these frogs' distinctive orange inner thighs, it aroused our suspicions about a possible new species, especially because this habitat has never really been studied in detail before Identidad Madidi," which is the name of the Bolivian scientific expedition, James Aparicio, a herpetologist at the Bolivian Faunal Collection, said in a statement. [See Photos of New Species from Expedition to Suriname's Jungles]

"Robber frogs are small to medium-sized frogs distributed in the Andes and Amazon region and to date there are 23 known species," Aparicio continued. The frogs can range from about less than an inch to 1.5 inches (2 to 4 centimeters).

South America is something of a hotspot for discovering new species, according to expedition team member Robert Wallace, a conservationist with the Wildlife Conservation Society. "The tropical Andes are so biologically diverse, as is the Amazon," he said, adding that the Amazon Basin is largely unexplored.

Identidad Madidi is a multi-institutional effort to describe yet unknown species of Bolivia. The team of mostly Bolivian scientists set off on the expedition in early June. They plan to investigate 14 sites over the 18-month journey, descending a path of altitude from more than 16,000 feet (5,000 meters). The expedition will range from the mountains of the high Andes to the tropical Amazonian forests to the grasslands of northern Bolivia.

So far, the team has covered two sites and added 60 species of vertebrates to the official species list for the park. In addition to the robber frog, five other collected species may be new to science: a gladiator frog, also from the same site as the new robber frog; a spectacled lizard; and three species of marbled catfish, Wallace told Live Science.

Though scientists had known of the tube-lipped nectar bat (Anoura fistulata), they observed it for the first time in the park. It was first described a decade ago in Ecuador and has the longest tongue relative to its body size of any mammal; the bat can stretch its tongue nearly 3.4 inches (8.5 centimeters) into the deepest flowers.

The robber frog hopped into a team member's hands at the first of the two sites, in a tropical montane savanna, Wallace said, which contains natural grassland on mountains.

The second site, a drier montane forest, was absent of robber frogs. It is possible the new robber frog species is endemic to the tropical montane savanna, where grasses cover lush mountains, although more studies are needed, Wallace said.

"Over the last 25 years there has been a lot more research on biodiversity in Bolivia, and so there have been several discoveries," Wallace said. "We are hoping that the expedition will be able to register more new species for science."