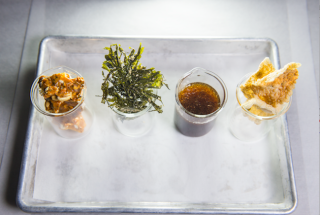 Scientists are currently cultivating a marine plant that's packed with more nutrients than the trendy green superfood kale. And it naturally tastes like bacon.

Bacon-flavored crackers. Bacon-flavored salad dressing. These are just two of the savory treats that have been created so far using the domesticated strain of dulse (Palmaria palmata), a kind of red algae, or seaweed, that typically grows in the waters along northern Pacific and Atlantic coastlines. [Science You Can Eat: 10 Things You Didn't Know About Food]

Dulse is usually harvested in the wild, dried out and then sold for up to $90 a pound, according to researchers at the Oregon State University (OSU) Hatfield Marine Science Center in Newport, Oregon, who developed the domesticated strain of the plant.

The OSU researchers are working on making dulse more affordable and more widely available. Their strain of the lettucelike marine plant can be cultivated using hydroponic farming methods in which the plants are grown in water, without any soil. These methods make dulse much easier to grow and harvest, and therefore more affordable. The researchers are currently producing about 20 to 30 lbs. (9 to 14 kilograms) of this fast-growing plant each week in two large, water-filled tanks at the Hatfield Marine Science Center.

However, Chris Langdon, a professor of fisheries at OSU who is leading the seaweed-farming effort, said that he and his colleagues can amp up production of the delicious plant to 100 lbs. (45 kg) a week. Langdon has been growing dulse for 15 years, but he and his fellow researchers only recently patented their novel strain of bacon-flavored seaweed.

The researchers originally started growing the plant as a food for abalone, a kind of large, edible mollusk that's often raised in commercial "aquaculture" farms. An excellent source of vitamins, minerals, antioxidants and protein, dulse is the perfect food for farm-raised abalone, Langdon said.

"The original goal was to create a superfood for abalone, because high-quality abalone is treasured, especially in Asia. We were able to grow dulse-fed abalone at rates that exceeded those previously reported in the literature," Langdon said in a statement.

But the researchers recently shifted their focus from feeding abalone to feeding humans. When Chuck Toombs, an instructor in OSU's business department, stopped by Langdon's office for a visit, he saw the tanks of seaweed growing outside Langdon's door. Toombs had come to ask the fisheries professor if he had any ideas for business projects for students. Clearly, the appeal of a bacon-flavored health food was not lost on Toombs.

Toombs paired up with OSU's Food Innovations Center in Portland, Oregon, to explore ways that dulse can be used as a cooking ingredient in both its raw and dried forms. So far, rice crackers and salad dressing made with the seaweed have been big hits.

"In Europe, they add the powder to smoothies, or add flakes onto food," Langdon said. "There hasn't been a lot of interest in using it in a fresh form. But this stuff is pretty amazing. When you fry it, which I have done, it tastes like bacon, not seaweed. And it's a pretty strong bacon flavor."

Business students at OSU are now working on a plan to bring this nutrient-rich and delicious-tasting seaweed to market. But first, they need to figure out a way to grow more of it, which shouldn't be too hard, said Langdon. Such operations are already up and running in Europe, where dulse has been harvested for human consumption for centuries, he said.

"The dulse grows using a water recirculation system," Langdon said. "Theoretically, you could create an industry in eastern Oregon almost as easily as you could along the coast, with a bit of supplementation."

In fact, all that's standing between you and the bacon-flavored superfood right now is seawater and sunshine, said Langdon, who noted that those two essentials are all that's really needed to make dulse grow.

More information about how dulse is being cooked up can be found at OSU's College of Agricultural Science's online magazine.