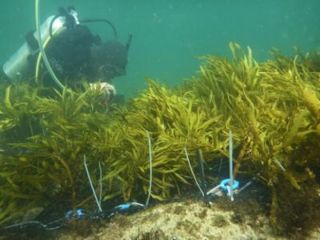 Phyllospora comosa seaweed is transplanted by a team member back onto a reef in Sydney from where it vanished decades ago. The transplanted seaweed has survived and reproduced.
(Image: © UNSW)

Seaweed transplants could help revive an underwater forest off the coast of Sydney, Australia, that was wiped out by sewage dumping decades earlier, a new study suggests.

The large brown seaweed species Phyllospora comosa, commonly called crayweed, once thrived off the city's shores, providing food and shelter for other undersea creatures like fish and abalone. But in 2008, researchers discovered that this macroalgae had disappeared from a 43-mile (70 kilometers) stretch of Sydney's coastline — and that it had probably been missing for years.

The embryos of Phyllospora are quite vulnerable to pollutants commonly found in sewage, the scientists noted in their study, published Jan. 8 in the journal PLOS ONE. During the 1970s and 1980s, a high volume of Sydney's sewage was pumped into the water close to shore. Even though the city introduced new systems in the 1990s to pump sewage into the deeper ocean, crayweed had not grown back in the area since then.

A group of ecologists took fertile crayweed from surrounding coastal areas and transplanted the species onto two barren reef sites off Sydney. At one site off Long Bay, transplanted crayweed individuals survived just well as those left undisturbed, and they even reproduced. Crayweed at the other site off Cape Banks did not fare as well: The specimens had lower survival rates and were in poorer condition than the controls. [Image Gallery: Great Barrier Reef Through Time]

Nonetheless, the researchers say these results are encouraging and that at least some sites in Sydney are healthy enough to support Phyllospora.

"The transplanted crayweed not only survived similarly to those in natural populations, but they also successfully reproduced," Alexandra Campbell, from the University of New South Wales (UNSW), said in a statement. "This creates the potential for a self-sustaining population at a place where this species has been missing for decades."

Seaweeds are the "trees" of the ocean, Campbell added; they support life along temperate coastlines, which can help promote biodiversity and sustain fishing and tourism industries. Compared to other habitat-forming species like corals, macroalgae have relatively fast growth-rates and short life spans, which makes transplantation an attractive restoration option for degraded coastal ecosystems, the study's authors wrote.

"This kind of restoration study has rarely been done in these seaweed-dominated habitats, but our results suggest that we may be able to assist in the recovery of underwater forests on Sydney's reefs, potentially enhancing biodiversity and recreational fishing opportunities along our coastline," said research supervisor Peter Steinberg, director of UNSW's Sydney Institute of Marine Science.