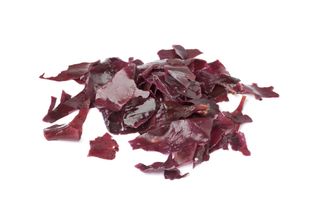 Dulse, which is a type of red algae, is a good source of iodine.
(Image: © Dulse leaves photo via Shutterstock)

Yesterday, I sat down to have lunch with a good friend, and she was completely taken aback by something I did. She thought I was sprinkling poppy seeds onto my salad, so when I proceeded to tell her that those little black things were, in fact, chia seeds, she became flabbergasted. "You mean to tell me that you're eating the seeds that are used to grow 'hair' on a Chia Pet?" she said. That one gave us both a good chuckle.

But then I realized that many people might think of chia seeds as a novelty item, instead of the super food they really are, and I got to thinking about how many amazing health foods remain a mystery to so many people. They're not necessarily exotic or expensive. I guess they just don't have a good PR representative.

I decided that it's time to do my part to help boost awareness for these under-appreciated foods.So, here are some amazing health foods that you may want acquaint yourself with:

The seeds are also quite interesting in that they can gelatinize virtually any liquid. Just put ½ cup into about 2 cups of milk, add sweetener and refrigerate for about four hours. Viola. You now have pudding! It's similar to the consistency of rice pudding.

Chia seeds are also a great addition to many recipes, from smoothies to salads.

Amaranth: This quick-cooking ancient grain contains about 13 percent protein by weight, is high in vitamin B6 and folate, and is gluten free.

Amaranth a great substitute for rice, pasta or potatoes to boost the nutritional profile of any meal.

Dulse: Dulse is a type of red algae, and is an excellent source of iodine, especially for those who avoid dairy. Adults need about 150 micrograms daily, according to the National Institutes of Health, and without it, our bodies will not function properly.

Instead of using iodized salt, I combine natural sea salt with dulse flakes. This way, I also benefit from this sea vegetable's high potassium and antioxidant content.

Raw Apple Cider Vinegar: Apple cider vinegar isn't a mysterious ingredient, but the raw version seems to elude most people. That's probably because most grocery stores don't even carry it. You will find it in most health food stores, though.