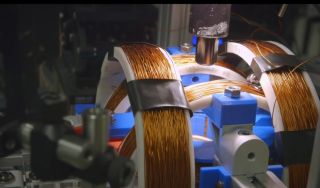 A computer made using water and magnets can move droplets around inside itself like clockwork, researchers say. The device demonstrates a new way to merge computer calculations with the manipulation of matter, scientists added.

Whereas conventional microelectronics shuffle electrons around wires, in recent years, scientists have begun developing so-called microfluidic devices that shuffle liquids around pipes. These devices can theoretically perform any operation a conventional electronic microchip can.

Although microfluidic devices are dramatically slower than conventional electronics, the goal is not to compete with electronic computers on traditional computing tasks such as word processing. Rather, the aim is to develop a completely new class of computers to precisely control matter. [Super-Intelligent Machines: 7 Robotic Futures]

"The fundamental limits of computation, such as how fast you can go or how small devices can be, are based in how information has to be represented in physical entities," study co-author Manu Prakash, a biophysicist at Stanford University, told Live Science. "We flipped that idea on its head — why can't we use computations to manipulate physical entities?"

Current applications for microfluidic chips include serving as miniaturized chemistry and biology laboratories. Instead of performing experiments with dozens of test tubes, each droplet in a lab-on-a-chip can serve as a microscopic test tube, enabling scientists to conduct thousands of experiments simultaneously, but requiring a fraction of the time, space, materials, cost and effort of a conventional laboratory.

But one major drawback of microfluidic devices is that the droplets of liquid are usually controlled one at a time. Although Prakash and his colleagues previously demonstrated a way to control many droplets on a microfluidic chip simultaneously, until now, the actions of such droplets were not synchronized with each other. That makes these systems prone to errors that prevented the devices from taking on more complex operations.

Now Prakash and his colleagues have developed a way for droplets on microfluidic devices to act simultaneously, in a synchronized manner. The key was using a rotating magnetic field, like a clock.

The core of the new microfluidic chip, which is about half the size of a postage stamp, consists of tiny, soft, magnetic nickel-iron-alloy bars arranged into mazelike patterns. On top of this array of bars is a layer of silicone oil sandwiched between two layers of Teflon. The bars, oil and Teflon layers are in turn placed between two glass slides.

The researchers then carefully injected water droplets into the oil; these droplets were infused with tiny magnetic particles only nanometers, or billionths of a meter, wide. Next, the researchers turned on a rotating magnetic field.

So far, the droplets in this device are as little as 100 microns wide, the same size as the average width of a human hair. The researchers noted their models suggest the devices could ultimately control droplets just 10 microns large. "Making the droplets smaller will allow the chip to carry out more operations," Prakash said.

The researchers now plan to make a design tool for these droplet circuits available to the public, so that anyone can make them.

"We're very interested in engaging anybody and everybody who wants to play, to enable everyone to design new circuits based on building blocks we describe in this paper, or [to] discover new blocks," Prakash said in a statement.

Prakash and his colleagues Georgios Katsikis and James Cybulski, both of Stanford University, detailed their findings June 8 in the journal Nature Physics.