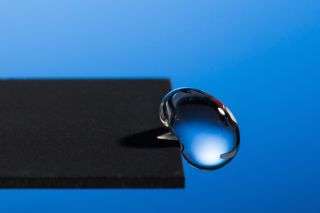 Using lasers, scientists have created a new material that is so water-repellent that droplets can bounce straight off of it. The surface could be used for everything from preventing ice from developing on airplane wings to creating self-cleaning toilets, the researchers say.

Scientists created the water-hating material by laser-etching a microscopic pattern on a metal surface. And unlike traditional chemical coatings, the new material will not wear off, they said.

"The water falls towards the surface, and is repelled and bounces off the surface," study leader Chunlei Guo, an optical physicist at the University of Rochester in New York, said in a YouTube video. "This is achieved by creating a unique pattern of surface structures at micro- [millionth of a meter] and nanoscales [billionth of a meter] with our laser processing technology." [See video of water bouncing off new material]

The laser-etched pattern makes the surface strongly water-repelling, or hydrophobic. It's much more repellent than typical chemical coatings, like the Teflon in nonstick frying pans. Teflon-coated surfaces need to be tilted at nearly a 70-degree angle before a water droplet will slide off, whereas the new material only needs to be tilted at less than 5 degrees, the researchers reported yesterday (Jan. 20) in the Journal of Applied Physics.

The surface also has self-cleaning properties. As water droplets bounce off of it, they pick up dust particles, the researchers said.

To create the new material, Guo and his colleagues used powerful, but very short, laser pulses to etch a platinum, titanium or brass surface. Each laser pulse lasted about a quadrillionth of a second, but reached a peak power equivalent to that of the entire power grid of North America, the researchers said.

Guo and his team tested the material's self-cleaning properties by applying dust from a vacuum cleaner to the material's surface. They found that they could remove about half of the dust particles using only three drops of water, and they were able to remove the dust entirely with about a dozen drops, the researchers said. The result was a completely dry, spotless surface.

There are numerous potential applications for this water-repelling material, the scientists said. Laser-etched coatings on airplanes could prevent dangerous ice from building up on the wings. Etched surfaces could also be used to keep toilets clean in developing countries, where water is scarce —a use that has drawn interest from the Bill & Melinda Gates Foundation, which helped fund the work.

In previous work, the researchers used a similar laser-patterning technique to turn metals black by making them very optically absorbent. The combination of these light-absorbing and water-repelling properties could produce more efficient solar panels that wouldn't rust and would require less cleaning, the researchers said.

There are still a number of challenges to overcome, however. Currently, it takes an hour to etch a 1 inch by 1 inch (2.5 by 2.5 centimeters) piece of metal, and this process needs to be sped up, the researchers said. The team also plans to apply the method to nonmetal surfaces.